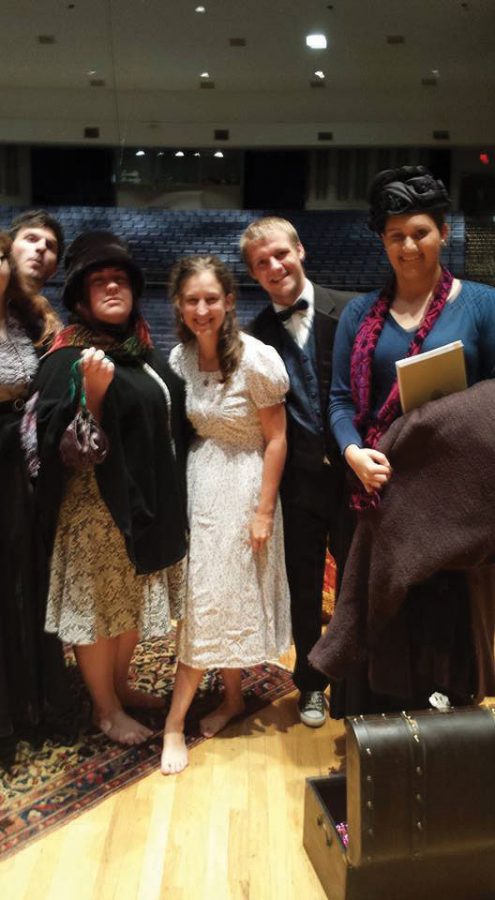 (From left to right.) Brianne Stewart, Clare Bryan, Caleb Marcus, and Josey Trimble pose after their first production of "The Medium" with the Washburn Opera Studio.

Chamber operas can be very enjoyable. Their intimate setting allows for close viewing, relaxed set pieces and intimate connection with the actor’s faces. The actors can emote without having to gesture in large fashion to their audience, and the music is all the more intense due to the proximity. “The Medium” is not only a wonderful production from The Washburn Opera Studio and its faithful leader Professor Andrea Garritano, but it also simultaneously surrounds with beautiful music and a wonderful story.

The cast is professional and engaging in their respective roles. The smaller characters of the opera portrayed by Mary Stithem, Caleb Marcus and Josey Trimble all do great jobs despite their brief appearances. Brett Larimore’s mute character is particularly well-portrayed through a mix of clever facial cues and expressive body language. Clare Bryan’s portrayal of Monica is wonderful, as she perfectly transitions between joyful and fearful scenes, and her singing voice is particularly impressive. Brianne Stewart carries the opera with her wonderful portrayal of Madame Flora, a character that I initially despised, but was captivated by due to her interesting characterization. On top of that, Stewart’s contralto voice is transcendent and works very well for the character she is portraying.

As for the setting, it is enjoyably simple and intimate, which adds to how captivating the events are as they unfold before us. It felt as though I was crouching outside a window spying on the mysterious people in Flora’s house and the odd people who visited her. It almost felt like I was thrust into a secret that I should not have been hearing. All of this made the opera so much more interesting.

This was my first experience of a Washburn Opera Studio performance and I was incredibly impressed. All I know is that there are several professionals involved in these productions, and they do an amazing job. I will be attending whatever they plan to do in the future, and you should too.