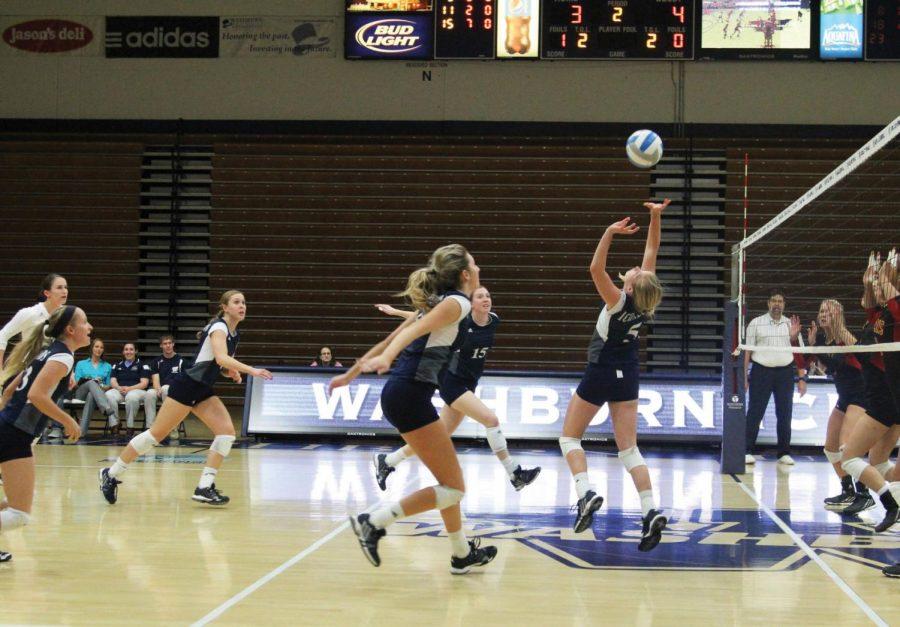 Shayla Conner sets the ball for teammate to spike it to their opponents from Pittsburg State University.

The Ichabod volleyball team, ranked number 14, started off homecoming with a win over Pittsburg State on Friday, Oct. 23.

Washburn remains second in the MIAA standings, which also came along with Sarah Vicory, middle hitter, putting up her 300th career block.

Sarah Vicory, middle hitter, had 13 kills and two blocks for the night. Along with her teammate Leanna Willer, who impressively put up 10 kills and two aces.

Liz Powell, setter, had 14 assists with nine digs and Taylor Selk, right side hitter, put up seven kills and one block.

Alyssa Carney, defensive specialist/libero, put up double digits with 14 digs on the night. Alongside Carney, Leanna Willer, outside hitter, had two aces.

Jordan Hoffman, middle hitter, competed at the net with three blocks, along with Korie Thompson, outside hitter, with two blocks to tie with Vicory.

The Ichabods took an early lead of 8-2 in the first game after Pittsburg State struggled to make a comeback. They finished it out with a final score of 25-13.

At set point, a kill from Selk forced two situations with the Ichabods coming out on top for the win.

Washburn fell behind in the first couple of sets to keep the game close before racing ahead for late wins.

The Ichabods were down 10-6 in the first game, as coach Herron called a timeout before working their way back up taking a lead of 12-11. After the Ichabods had taken their lead, Central Oklahoma reclaimed control with a score of 14-12.

With the second game underway, both teams put up a fight with a very close game ahead of them. The Ichabods trailed at the beginning of the game with a score of 4-1, but then came back to tie the game at 9-9.

With back-to-back kills from Thompson, the Ichabods were leading at 16-13. At the end of the close game, Washburn came out on top with a final score of 25-21.

Washburn took the biggest lead of the night, nine, making the score 18-9. Although Central Oklahoma continued to play hard, answering with a score of 21-18, the Ichabods closed the first game with a kill from Vicory. The final score was 25-23.

Willer had 11 kills, while Vicory and Barrick had 10 kills. Barrick also had her first double-digit career kill match, which tied Swan for the lead throughout the team.

Bates and Thompson each had 12 digs while Bates had 20 assists.