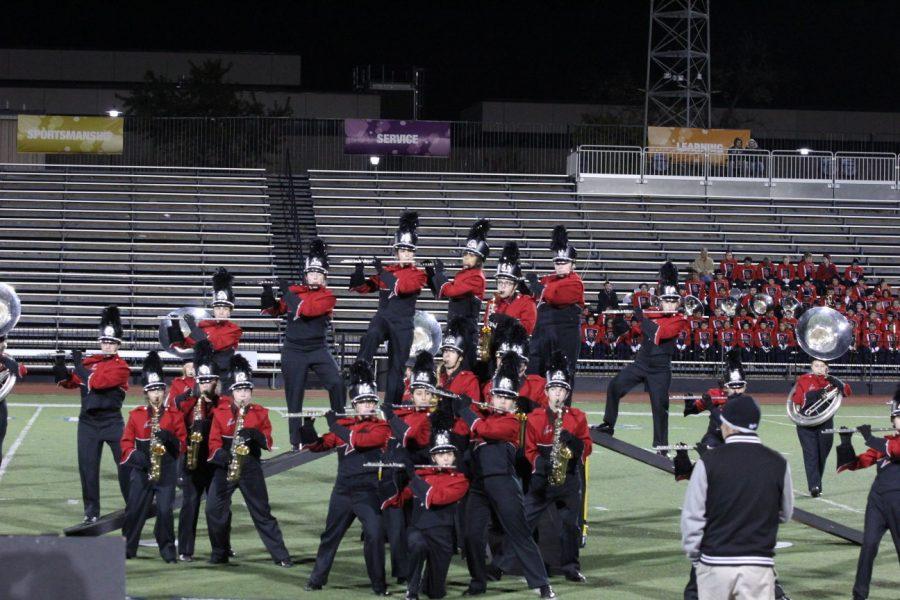 Lawrence high school marching band performs their show "Phobias" while marching on top of their props. Lawrence earned 4th place at the competition.

For an entire day, Oct 17, Yager stadium was filled with moving music.

The competition was a marching band competition that was targeted at high school bands of all sizes, evaluating them all on an even playing field in the categories of marching style, music and flag team performance.

The teams first went through preliminaries, where they were ordered based on school size, the smallest in the morning and the largest later in the evening. At 6 p.m. the bands received their ratings. In third place was Lawrence high school, second place was Derby high school, and first place went to Olathe East.

At 6:45 p.m., the teams had to suit up yet again for finals performance, where the bands performed in score order, with the lowest scoring bands performing first.

The temperature that night sunk bellow 50 degrees, the kind of temperatures where metal starts to chill and wood begins to shrink. In a night like that, regardless of preliminary scores, any high school student’s performance could be radically different.

At 10 p.m., Washburn’s marching band performed an exhibition show right before the final awards ceremony. Performing their standard half time show, the Ichabods even had time to dance in the dark when the lights suddenly went out in Yager stadium.

When the lights came up, the drum majors and dance captains for every band were lined up: 13 bands who had gone to finals out of the 21 bands who participated. A few of the bands switched places in the ceremony, but toward the end the scores began to wow the crowd.

But that wasn’t how it worked out. Instead, Buhler and Olathe East ended up in a tie for first place. In most band competition, a tie is typically decided with a drum off, but due to the time of night, time constraints with the bands, and a general sense of fatigue, the band association ended the first annual Kansas Band Masters competition in a tie.