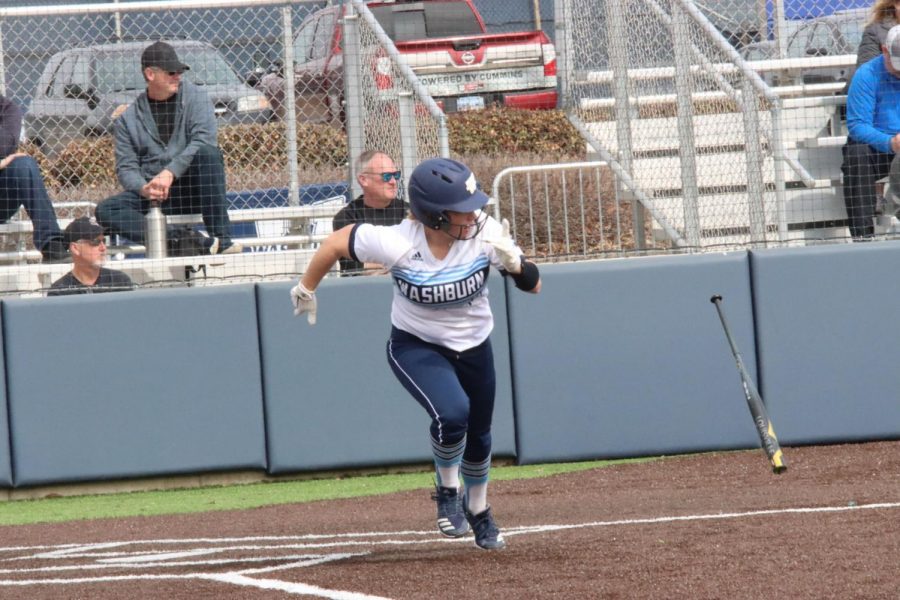 Ground ball: Right fielder Ashton Friend runs to first base after hitting a ground ball during Sunday's game against the Mustangs. Friend is a junior kinesiology major.

Women’s softball climbed to 12-11 after a respectable win over the Southwest Minnesota State Mustangs, Sunday, March 1.

It was the final game of the 2020 Washburn Invitational and marked softball’s third-straight win over the Mustangs.

Junior pitcher Raegen Hamm led the way for the Ichabods with her pitching. She went the full seven innings, only allowing four hits – shutting out the Mustangs.

Senior outfielder Brianna Fuchs showed her leadership skills when she got things started with a triple. The Ichabods got an early lead when she scored as a result of Hadley Kerschen’s single to the center of the field.

Kerschen was a first team 5A all-state selection as a senior. Fuchs started all 52 games in 2019 and finished third on the team in batting average at .345.

“It was good to start off having a hit for our team,” said Fuchs.

The softball team was dubbed “horse whisperers” after the Mustangs were unable to bring a runner across home.

Senior utility player Winter Henry hit a double to left-center field to start the third inning and then ran in for a score adding to her batting average of .382. Henry scored 22 runs, got 50 hits and 20 RBIs in 2019.

Junior catcher Cassidy Greer hit the single that pushed Henry to the plate. Greer is fearless and has a batting average of .400 for 2020.

“Their pitcher did a really nice job against us so, it was a good close game,” said Head Softball Coach Brenda Holaday.

The score ended at 2-0 bringing the team’s record to 4-1 for the weekend.

“It’s good to get a win and we finished the tournament 4-1, so we had a good strong weekend,” said Holaday. “I thought the pitching was good and we got a couple of hits when we needed it so we could score a couple of runs and then we just kind of let our pitcher do her thing.”