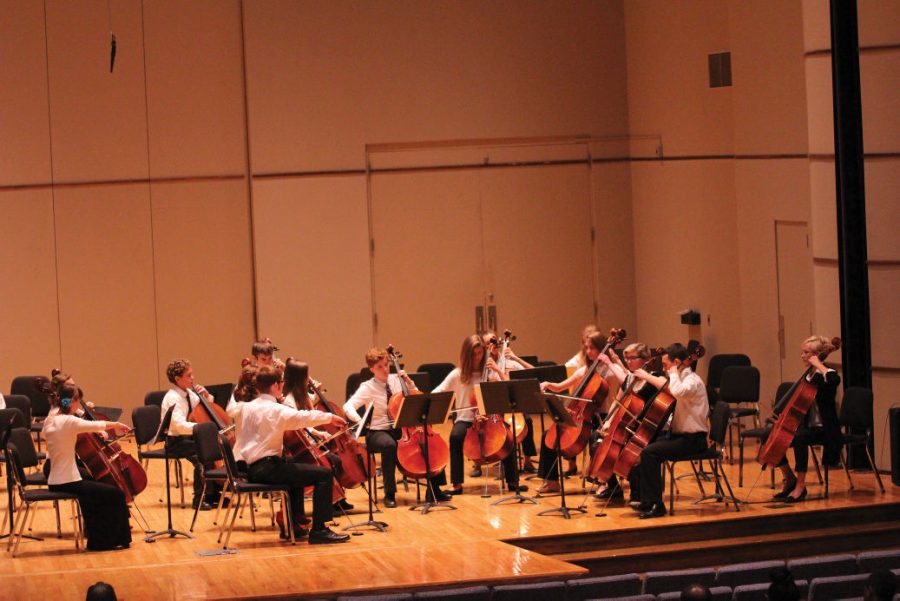 Topeka Cello Collective plays a delicate rendition of "To a Wild Rose." They next performed the more emotive "Bagatelle No. 1."

On Nov. 8, White Concert Hall hosted an event that showcased several ensembles of local young musicians. Many of the groups are directed by several Washburn faculty members, including Rebecca Meador, Karen Benda and Erinn Renyer. The program began at 7:30 p.m. and featured various ensembles spanning between middle school and high school students.

One group in particular was the Washburn Cello Ensemble, a group of five Washburn students. They performed a beautiful rendition of Astor Piazzolla’s “Libertango,” arranged by Nick Halsey. This performance in particular not only showed off the ensemble’s impressive ability to handle such a difficult piece, but highlighted the high level of talent present that night, as well.

The Topeka Youth Flute Choir performed two pieces. The first was simply titled “French Carol,” arranged by Carol Warner. Next, they played a wonderful rendition of the energetic and entertaining “March Militaire” by Franz Schubert, the piece was arranged by T.W. Swayzee. Despite the group being comprised entirely of flute players and Schubert’s piece having been meant for a full orchestra, their adaptation still managed to capture its energy and excitability.

A particularly fun piece was the Clarinet Collective playing “Cantina from Star Wars” by John Williams, arranged by Nathan Koch. Among all of the classical tunes, it was an entertaining surprise to hear the familiar sounds that commemorate Luke and Han Solo’s first encounter.

Audience members were invited to take the stage and draw names of several players in the ensembles who received prizes to honor their participation and their musical talents. Music equipment and plaques were also given to students from different schools, and were instructed to deliver the gifts to their respective directors.

The evening was capped off with the Cello Collective playing two pieces. First they played “Cancion de Suenos” by Carole Neuen-Rabinowitz. They concluded with the boisterous and dramatic “Blue Tango” by Leroy Anderson, arranged by Joan Harrison.

The evening was able to showcase the magnificent talent and musicianship both in Topeka and the surrounding area. All of it was made possible through the organization and dedication of Washburn’s highly involved music department.