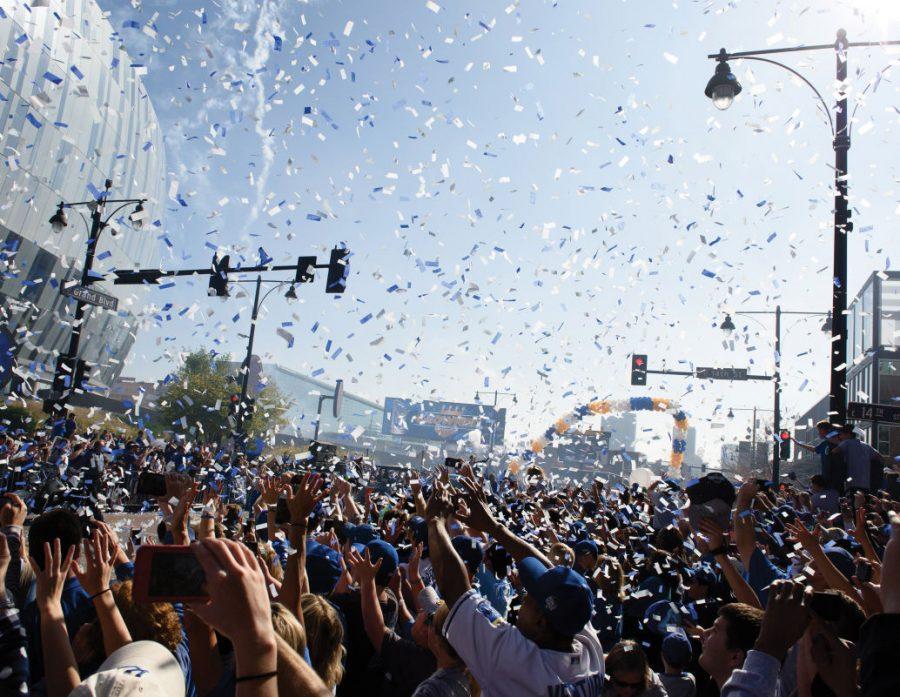 The Kansas City Royals left fans exhilarated after they seized the World Series title in the 12th inning of the fifth game in a 7-2 victory over the New York Mets.

After falling behind in the first eight innings, the Royals tied the game in the 9th inning and then barreled ahead by five runs in the top of the 12th inning to seal their victory in the third and final game in New York.

“I have never cried so much,” General manager Dayton Moore said to trust the process and the process is now complete,” said Shelby Ferguson, junior exercise physiology major.

Throughout the postseason schedule, the Royals have won over support and attention as fans anxiously watched them attempt to attain the World Series title.

The Royals had not won a World Series title since October 1985 when they played the St. Louis Cardinals in a 4-3 victory.

“It’s been wonderful to see the Royals do so well the past two years. It makes the past 30 years of losing worth it,” Ferguson said.

Ferguson considers herself a loyal fan after having stuck with the team through their “dark days.” This season she’s attended 32 games, including seven postseason games, with her season tickets, which cost $400.

Emily Zimmerman, senior communication studies major, has attended three games this year, but has since then watched all the World Series games with her friends.

“My favorite part about being at a Royals game is the atmosphere of just being in the stadium to watch the game,” Zimmerman said. “It puts a whole new perspective on it rather than just watching it on TV.”

For those without season tickets, watching the games on TV is a good way to show support. Many Washburn students have been diligently watching the postseason games to stay up-to-date on the Royals standing.

“I have watched most of the playoff games with my roommates and teammates,” said Jeremy Lickteig, junior biology major. “On nights when I need to study, I go to Stoffer and turn the game on a projector while I study.”

After losing the 2014 World Series title to the San Francisco Giants 4-3, most people were overjoyed to see the Royals back in the fight for the title this year.

“The Royals have their magic going. It did not surprise me to see them in the World Series again,” said Patti Lyon, director of the Washburn Catholic Campus Center. “They have something to prove after last year’s final game in the series.”

Washburn students have created a “Royal” blue campus by sporting their favorite Royals gear, including sweatshirts, t-shirts and their favorite players’ jerseys, to showcase their encouragement.

“I think the Royals’ success can be attributed to the passion, heart and upbeat spirits that they play with,” Lickteig said. “These same factors make following them exciting and enjoyable.”

Every player on the team contributed to the overall victory, but everyone has their favorite boy in blue. In regards to favorite players, Ferguson and Zimmerman share of love for Lorenzo Cain.

Ferguson likes Cain because of his down-to-earth and easily relatable personality while Zimmerman highlights his dependable and consistent qualities as a player.

Lickteig appreciates Alex Gordon because he “is admirable as a player and leader because he’s been with the Royals even over years of struggles.”

“I thought that the victory in game five was a picturesque ending for the Royals season,” Lickteig said. “It was won in a fashion exemplary of how they played all season. As a Kansas City fan, it was exciting to see those guys succeed.”

The Royals’ World Series title was celebrated with a two mile parade in downtown Kansas City on Grand Boulevard, which began at 12 p.m. and ended at 2 p.m on Nov. 3.

“The atmosphere was electric,” said Daniel Gordon, an undecided sophomore. “There was over 500,000 people and we were in the first five rows. I’ve always been a royals fan and I love that the Royals never quit. Even when they’re losing late in a game, you can never count them out. They always find a way to win.”