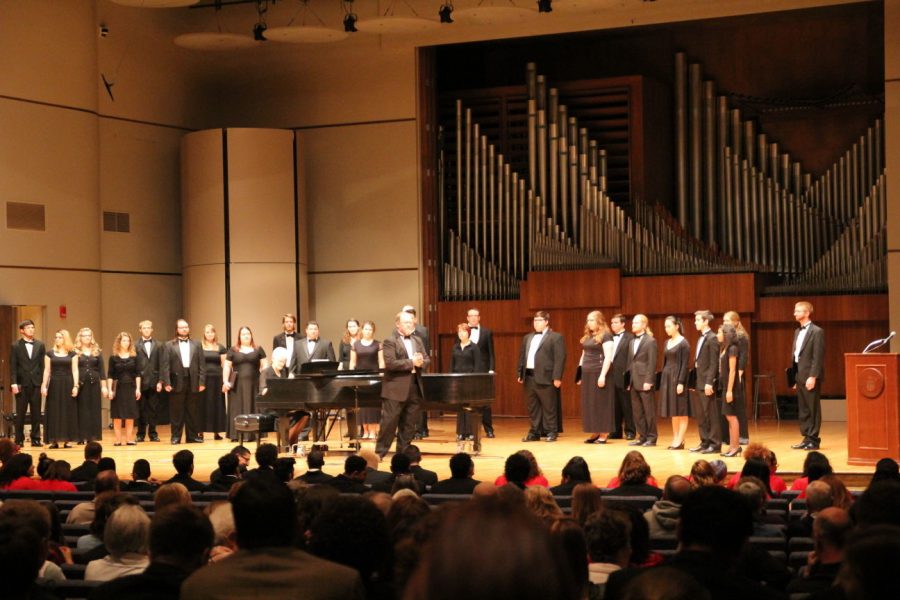 This week, White Concert Hall hosted its 43rd Annual High School Showcase Concert, sponsored by the Civic Music Club of Topeka and Washburn University as a benefit for the Stacie Beavers Scholarship. There was a six dollar admission cost to raise money for the scholarship. The purpose of this concert was to showcase each intermediate singing group from the local high schools. There was no formal judging, the concert was purely for entertainment and to allow the groups to show off what they have been preparing for the upcoming competition season. In total, nine local choral groups performed at this event.

The event preceded with a guest appearance from the Washburn Singers, directed by Dr. Kevin Kellim, and then followed by the Hayden Singers to kick off the event. Each group sang two to three different arrangements to show off their unique styles and ranges. The music varied greatly between uptempo, high energy pieces to slower, softer arrangements. The wide variety of genres and tempos present at the concert kept the audience engaged and entertained.

“I think all of the groups did a great job, and I really enjoyed how each song every school sang really contrasted with their other choice of song,” said Sydney Heinen, freshman undeclared major. “It helped show a range of style and it kept the concert interesting.”

The high school groups ranged from freshmen and senior performers, and all were coed. Each of the choral positions –soprano, alto, tenor and bass– were achieved in this concert. People of all ages attended, from family and friends of the performers, to Washburn and local high school alumni. Many current Washburn music students were in attendance as well to show their support for the visiting groups.

Many thought the concert went very well, as there were several standing ovations for soloists and outstanding choral performances.

“I was surprised by the concert tonight. Every school was great,” said Paul Cabili, Topeka High School sophomore. “They all performed really well. It is difficult to pick a favorite group or piece from tonight.”