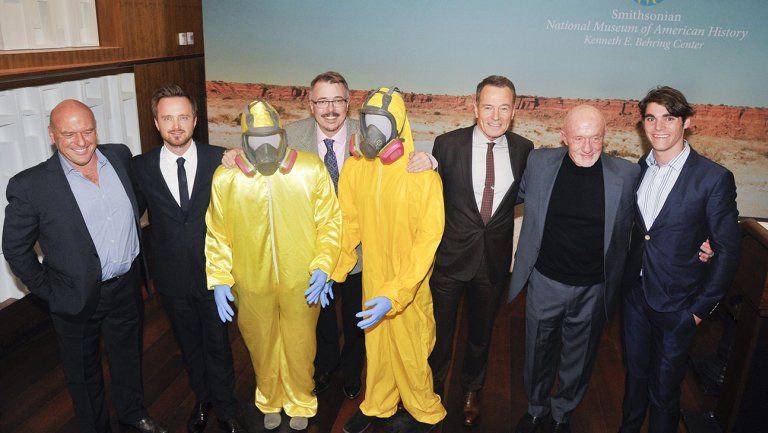 The memorabilia will join the museum’s section honoring American cultural influences, including television. TV shows already included in the collection are “Mad Men,” “The Wonder Years,” “Seinfeld” and “All in the Family.” The full collection is planned to be unveiled in 2018.

Some notable inclusions in the collection were the suits and gas masks that series protagonists Jesse Pinkman and Walter White wore when preparing their special brand of methamphetamine. The props used to depict the blue-colored drug were also given to the museum. Cups from the chain restaurant Los Pollos Hermanos were also added. The chicken eatery is known by fans to be a ruse used by drug kingpin Gustavo Fring to hide his illegal operations. The police sketch of ‘Heisenberg’ from the episode No Mas is also included, which is the rough cartoonish drawing that has become very popular and appears on t-shirts and mugs dedicated to the show.

Johannes Bolte, a business administration student in the MBA program, said he believes the show is culturally significant to have a place in the museum.

“The series is quite popular among society,” said Bolte.

The Smithsonian is very proud to bring these iconic props to their museum. “Breaking Bad” was a cultural marvel, the water cooler topic that riveted thousands of people in America and across the globe. To many people, the show was much more than an exciting crime-thriller that proved to be an enjoyable topic to discuss at the office, in the halls of school or at a restaurant with friends. It was transfixing as it explored the desperation of a man so lost that he resorts to making drugs to give him purpose.

“Breaking Bad” is more than a show about a man making drugs and killing to keep himself and his family safe. It’s a dazzling downward spiral into the depths of what makes the human condition so complicated. Its cultural impact will be felt throughout the realm of televised storytelling and the footprint it has left.