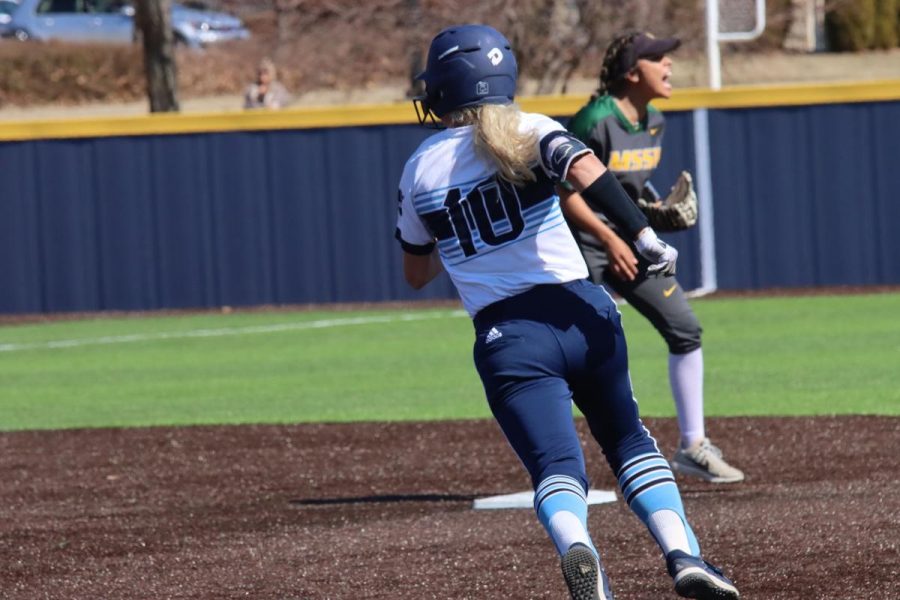 Springtime blues: Brianna Fuchs runs to the base during the Ichabods' last game of the season. Due to the MIAA cancelling the remainder of the spring season, Fuchs and other athletes will not be finishing their senior season.

We are all familiar with the current situation of the virus and the problems it creates for our health. March 11, the World Health Organization declared the rapidly spreading COVID-19 as a pandemic and acknowledged that the virus would spread to all the countries in the world affecting millions and killing thousands. The number of deaths and the number of affected countries are expected to climb higher.

The virus is believed to have started from a wild bat in Wuhan, China, and spread rapidly in the province forcing a public shutdown in the area. While the situation in China has been improving at present, the spreading of the virus has worsened worldwide.

As the US death toll grew to almost 670, states are ordering more shutdowns. Doctors are begging the public to keep their distance from others. The number of coronavirus cases in the United States has soared past 50,000. Due to the rapid spread, schools and universities have shut down and virtual or online classes have been introduced. Washburn University has also taken action regarding the pandemic. All the classes are being taken virtually. The implementation of distance learning has encouraged people to stay in their homes and study so that there are less chances of the virus spreading.

As the shutdown has caused less people to move around, there is clearly less pollution around. But not all consequences of the outbreak are positive. All different types of sports and events taking place in different corners of the world has been cancelled or postponed. The news has shown many players and coaches have been infected by the virus.

All the spring games and sports have been suspended. The athletic department has expressed their sorrow regarding the cancellations. “The health and well-being of MIAA student-athletes, coaches, administrators and our communities continue to be the association’s top priority,” said the MIAA council.

To the students who value sports dearly, the suspension is heartbreaking.

“While I completely understand and believe in the reasoning behind cancelling, it is mentally hard to wrap my mind around the concept. We athletes have been participating in sports 24/7 for 15+ years. Going months without being in a team environment and what we love is indescribable. Sports are a get-away for most kids. It’s a stress reliever and is so good for the mental and physical health. Although cancelling is a necessity for our nation’s health, it’s hard to wrap my mind around the idea of not playing or seeing my teammates for who knows how long,” said soccer midfielder Tera Lynch.

Logan Morrissey, a member of the tennis team, said that when she first heard the news, she was heartbroken.

“It seemed like everything was crashing down in that moment and to say I was freaking out would be an understatement,” said Morrissey.

Despite several injuries during the season, she was only two wins away from breaking the school doubles record. Although the current season was cancelled, they are being granted another year of eligibility, for which she is grateful.

“I am very thankful to have another opportunity to play the sport I love and finish it on my terms,” said Morrissey.

Softball lover Brianna Fuchs said she had tears in her eyes and knots in her stomach when the news was broken to her team.

“This is the most unthinkable, unimaginable thing that could have happened,” said Fuchs.

However, she too went from heartbreak to pure joy when she discovered that the NCAA had approved an additional season of eligibility and that she would get another opportunity to be with her teammates.

While the cancellation has left many devastated and heartbroken, the reduced risk of the deadly disease spreading and another year of eligibility has provided some solace during this difficult time. Many senior athletes are struggling with this heartbreak. Check on your athlete friends during this trying time.