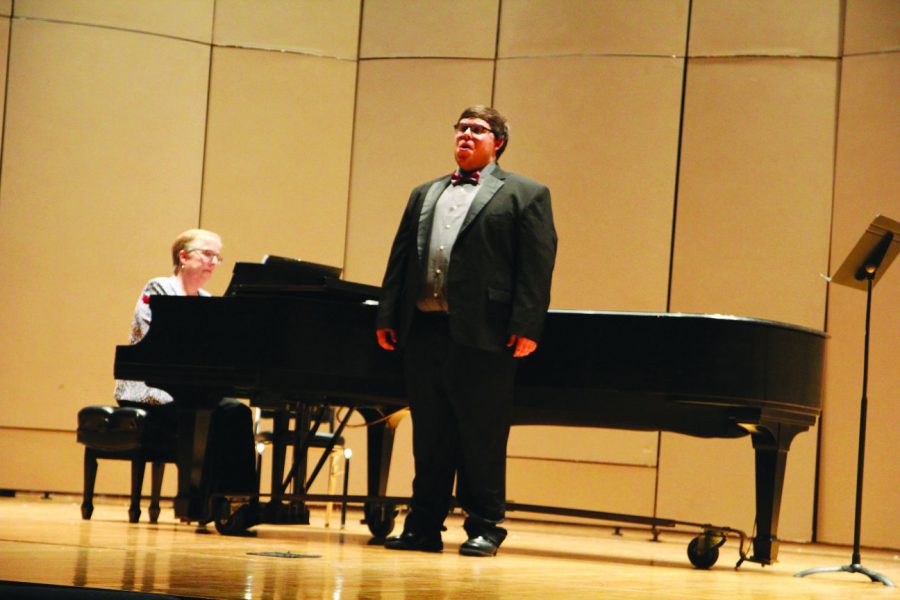 Zachary Cope sings "Care Selve" by Handel. He was accompanied by Cynthia Strait on the piano for this operatic piece.

Cope performed nine songs in total in a variety of styles and tempos. His pieces were an assortment of classical pieces by George Frideric Handel, as well as many other artists from the late 1600s to mid-1900s, such as Giuseppe Verdi, Samuel Barber and Jules Massenet.

His performance was made up of two parts, beginning with arrangements by Handel. The first was “Care Selve” and “Sleep Why Dost Thou Leave Me.” Following the first performance, he sang a five-part piece that included “Comfort Ye,” “Thy Rebuke Hath Broken His Heart,” “Behold and See,” “He Was Cut Off” and “But Thou Didst Not Leave His Soul in Hell,” all by Handel.

After performing Handel’s pieces, he then sang the two arrangements “Verborgenheit” by Wolf and “E la solita storia” by Cilea to finish the first half of his vocal performance.

After a brief intermission, Cope resumed his performance with an arrangement by Massenet titled “En Fermant les Yeux,” followed by Verdi’s “Parigi, O Cara” and “Old Mother Hubbard” by Hutchinson, which was a nursery rhyme that Bryan accompanied. He continued with “Sure on this Shining Night” by Barber. His final song, “Going Home” by Dvorak, was dedicated to a family member.

“‘Going Home’ by Dvorak was my favorite piece,” said Cope, a countertenor and tenor in the Washburn choir.

Cope began singing lessons during his eighth grade year and continued through college. He had been preparing for this performance since the beginning of his freshman year at Washburn. He worked closely with Ann Marie Snook and Cynthia Strait.