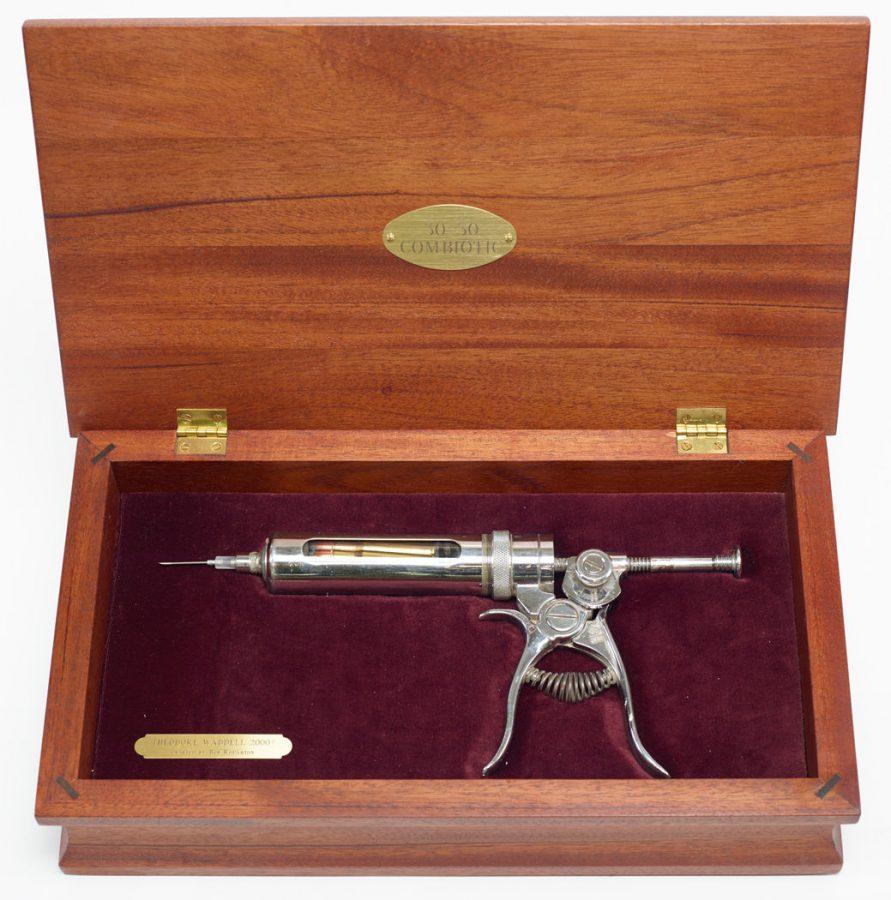 Waddell's opinions on gun collecting are prominent in this piece called "30-30 Combiotic."

A deer skull adorned with gems, a large syringe filled with bullets in an ornate gun case, a coyote carcass running across a field, a firearm made from salt. On Jan. 12, the Mulvane Art Museum presented a new collection called “Hallowed Absurdities.”

The collection has several different pieces from artist and rancher Theodore Waddell and will be available until March 5. A special reception for the artwork will be held 5:30-7:30 p.m. Feb. 5 during Topeka’s Friday Artwalk.

Waddell explores several different themes, including the United State’s obsession with firearms, which, according to the Mulvane Art Museum curator Julie Myers, is very topical considering discussions of firearms on campus are becoming more present in America.

In an artist statement made by Waddell, he commented on attitudes toward trophy hunting.

“I can’t quite understand how someone can look at a huge bull elephant and then reduce it to a mass of nothing with a high powered weapon and then preserve the moment with a mount,” Waddell said.

One notable piece that comments on trophy hunting is “Trophy 14,” which depicts a large deer skull that has been adorned with bright colors, its eye sockets have blue gems stuffed into them. Waddell’s opinion toward mounts is very prominent in this work. He satirizes taxidermy and trophy hunting by depicting a stag dressed up because people find it pretty.

Several pieces reflect his attitudes toward firearms. He places unconventional items in velvet cases, such as large syringes and the jawbones of animals. Myers says that Waddell created these pieces to comment on gun collecting. To Waddell, guns are tools, and presenting them in ornate cases is unnecessary and trivial.

One notable piece is “30-30 Combiotic,” which depicts a large pistol grip syringe loaded with bullets in a velvet lined wooden display case. Myers says that this piece asks that if guns are tools then why not present and hold other tools in such ornate cases, tools such as a large syringe. Waddell said in his press release that, “Hopefully, the trophies and fun pieces will cause some people to examine their positions with regard to this activity. Humans with guns have not examined their responsibilities with regard to pulling a trigger.”

Waddell’s art reflects a deep personal philosophy on life. In Waddell’s eyes, sometimes killing an animal is necessary, but he still regards it as taking a life. He believes that all life is precious, and should be treated as such.

“When a life is taken, the spirit is gone,” Waddell said. “As animals, we share this earth with other animals. My work explores out living and dying.”

A panel discussion of the artwork will occur on Feb 16. The art museum is located at Southwest 17th and Jewell and is free and open to the public.