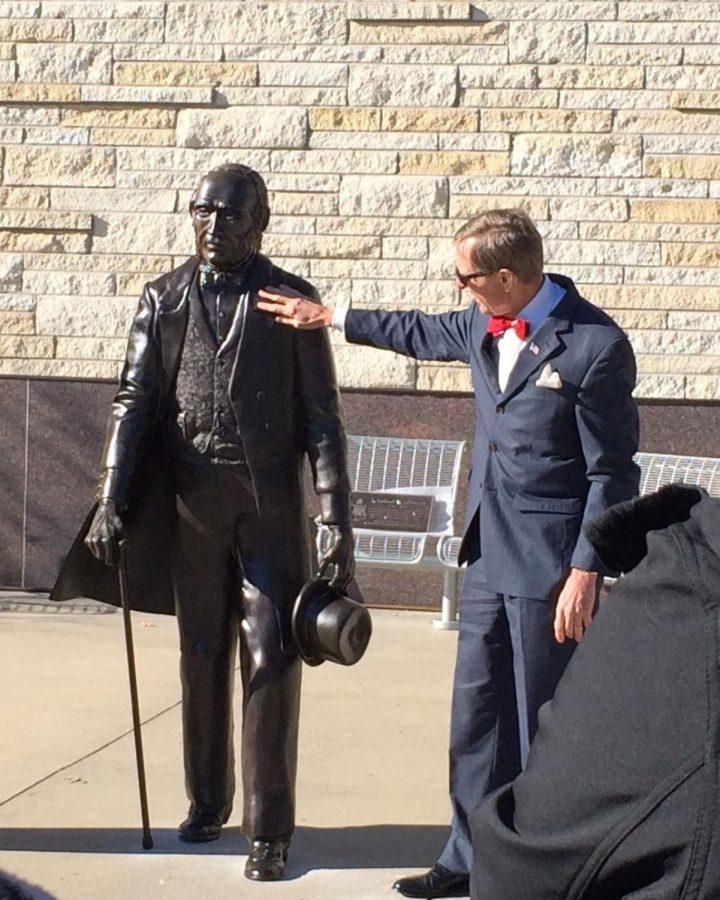 President, Jerry Farley, unveils the new statue of Ichabod Washburn, the university’s namesake, who donated $25,000 to the school in 1868.

When Washburn University was once Lincoln College, a school in need of serious money to continue its educational programs, businessman and church deacon Ichabod Washburn helped make history.

Thanks to his financial support, Lincoln College was able to continue on. Over time, the school transitioned into Washburn Rural School, then decided to make a much bigger facility that was offered for people who looked to complete their college degree. Once this happened, Washburn Rural School became what is still known as Washburn Rural High School.

In memory of Ichabod Washburn, the campus thought that it would be fitting for its benefactor to have his own statue that represents him on campus.

Patrick Early, director of university relations, spoke about the impact that they hope to have with the statue on campus.

“There really isn’t anything representing Ichabod Washburn on campus, such as a Washburn Hall, so we wanted to place a few statues on campus in memory of him,” Early said. “He was a man that never set foot in Kansas, so we find it very important that the man is remembered on campus.”

Placed on the east side of Memorial Union on Dec. 21, 2015, the statue stands taller than the actual height of the man himself.

“The statue is a bit taller, but it’s a great representation of what he may have looked like,” Early said.

On Martin Luther King Jr. Day, the statue was removed in order to finish some repairs. It is unknown what repair this is or when the statue will get to be displayed once again for everyone to see. In the meantime, there is a spot next to the east side doors of the union that is blocked off for the statue’s placement.

Local Topeka artist Janet Zoble designed the statue through the help of her company, Promark Management. The funding came through Present Relations, which helped cover the cost for Zoble and her company to finish the 7-foot statue.