Player of the Week: Javion Blake 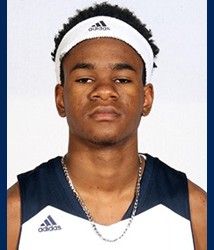 Freshman guard for the Ichabods shows promise for the future. A look at the man behind the player, who is the only Freshman currently starting on the men’s basketball team. He plays for family as well as his own personal enjoyment with basketball.

Javion Blake, business major, is the Washburn male player of the week.

Blake is from Olathe and went to high school at Olathe East. He is a freshman this year and plays guard for the Ichabods.

Blake has been playing basketball since the age of 2, having been inspired by his parents who both played basketball in high school. His father also played for a year in college. Blake began organized play at age 5 and hasn’t looked back since.

In high school he was all-state, all-league, all-metro and first team all-Sunflower League, which easily propelled him into playing in college.

“Athletics is just in my blood,” Blake said.

“My family is what motivates me, I just want to see myself do better and use my talents.”

Blake is a starter and enjoys playing with his team.

“I like to pass a lot to my teammates,” Blake said. “Seeing them score makes me feel good.”

When asked about why he chose to come to Washburn, Blake said that “At the unsigned senior camp I did really well. I took my visit here at Washburn and really liked the people here. I played open gym with the guys and it felt like home. That’s what I was looking for.”

“The season is going well,” Blake said. “I know our team is young. We’re battling through tough games, close games, but we’re learning every day. Our team is going to be good, if not by the end of this year, then next year for sure.”

Being a freshman, Blake intends to play all four years he’s at Washburn, and possibly even beyond.

“I see this thing going far, definitely to my senior year, and hopefully even after.”

Jan. 16, Blake was the second highest point leader for Washburn against Northwest Missouri State with 10 points.

On average, Blake scores almost 14 points per game, plays for 30 minutes each game, gets 3.3 rebounds per game, 2.3 assists per game and steals at least one ball per game.

Outside of basketball, Blake is a normal student.

“I enjoy taking time away from the court, pursuing my studies, making time for my families and just being a regular college student like everyone else,” Blake said.