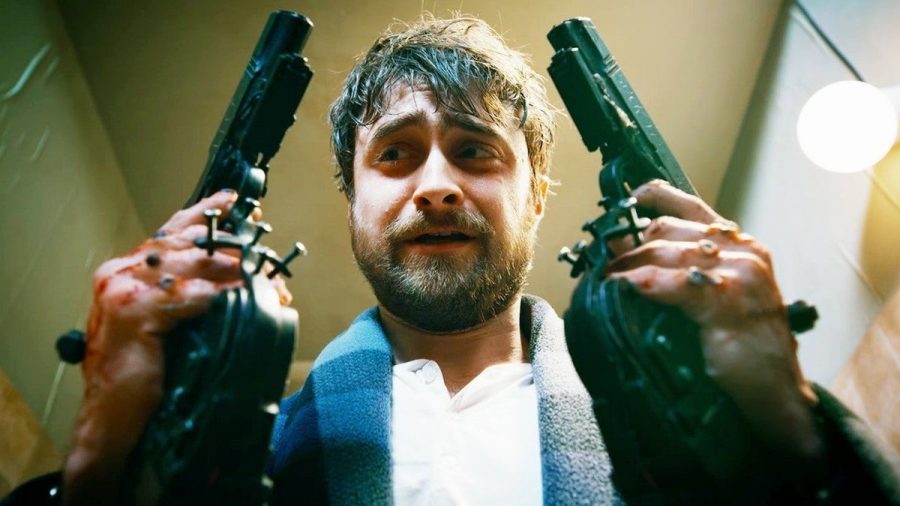 Flatlining: Available now On-Demand, "Guns Akimbo" is one of the more disappointing movies I have seen in a while. Pictured is Daniel Radcliffe as protagonist Miles Lee Harris.

One of my guilty pleasure movies that never fails to entertain me is Jason Statham’s “Crank,” and its sequel “Crank: High Voltage,” whose runtime consists of literally almost nonstop action and movement.

I can definitely say that ‘Guns Akimbo” is a “Crank”-like movie. The bad news is, it just isn’t that great of a movie.

The basic setup of the movie is that there is “Skizm,” a to-the-death fight club, essentially more of a terrorist group. It has different fighters competing for the number one spot, and endless parade of violence that leads to the death of the participants, and enjoyment for the ones watching it unfold via the internet. Ran by big cheese Riktor (Ned Dennehy), the shadowy terrorist group at the top kidnaps computer programmer/game developer Miles Harris, played by Daniel Radcliffe with an American accent, and forces him into the competition, knocking him out and drilling two handguns into each hand, which he cannot remove, leading to the title of the movie. The other lead is Nix, portrayed by the excellent and always scene-stealing Samara Weaving, a top Skism fighter, who is out to kill Miles to achieve a higher rank.

It definitely has the action I crave in a movie that seems to be a “Crank” successor, but the rest of the movie is wildly inconsistent, and the two leads can’t necessarily do much to save it. I’ll get some of the positives out of the way first before I rail on this movie. The first is the two leads are both excellent, which comes as no surprise. Radcliffe shows once again he is a great actor aside from those wizard movies, and Weaving making the best out of what she’s given, and this movie isn’t really an exception in her streak of being the best part of any given movie.

When it comes to the humor and writing, that is where the film shows its biggest weaknesses that really ruin it. The humor often just doesn’t hit the mark. The only real time I found it funny was really anytime Radcliffe had to deal with having guns for hands. Opening a door, using a phone, changing clothes, using the restroom, there are tons of instances where Radcliffe convincingly shows his pain in doing everyday tasks turned incredibly difficult. Unfortunately, that isn’t the bulk of the comedy in this movie, so the rest is just dumb attempts at comedy that doesn’t land.

Then there is the dialogue, highlighting the problems that sometimes occur when having a director also be the sole writer of their movie. Jason Lei Howden isn’t exactly the best writer of dialogue, and so much of it is so ham-fisted you can’t help but notice the problem.

Finally, there is the plot structure. While both “Crank” and its sequel have constantly ramping up intensity, “Guns Akimbo” sort of has this, but it doesn’t work as well as it could have. While there is a basic film structure of rising action, climax, falling action, etc, they are just so similar and the movie just doesn’t really escalate to a bonkers level of intensity you’d hope a movie like this would.

I find it sad that this film just ended up being mediocre. All I can give it really is that it has two wonderful leads, relatively good action and a few doses of comedy that hits, but the rest of it just left me disappointed.

It is a movie that unabashedly tries to appeal to gamers, but it is very obvious that the person in charge does not know the targeted audience, and this is the biggest thing that makes the film stumble on itself. I really wish I could say I recommend this, but all I can say is that, at the very least, it managed to keep me entertained. It wasn’t exactly quality entertainment, and I suppose it could have been much worse, but that doesn’t excuse its many faults.