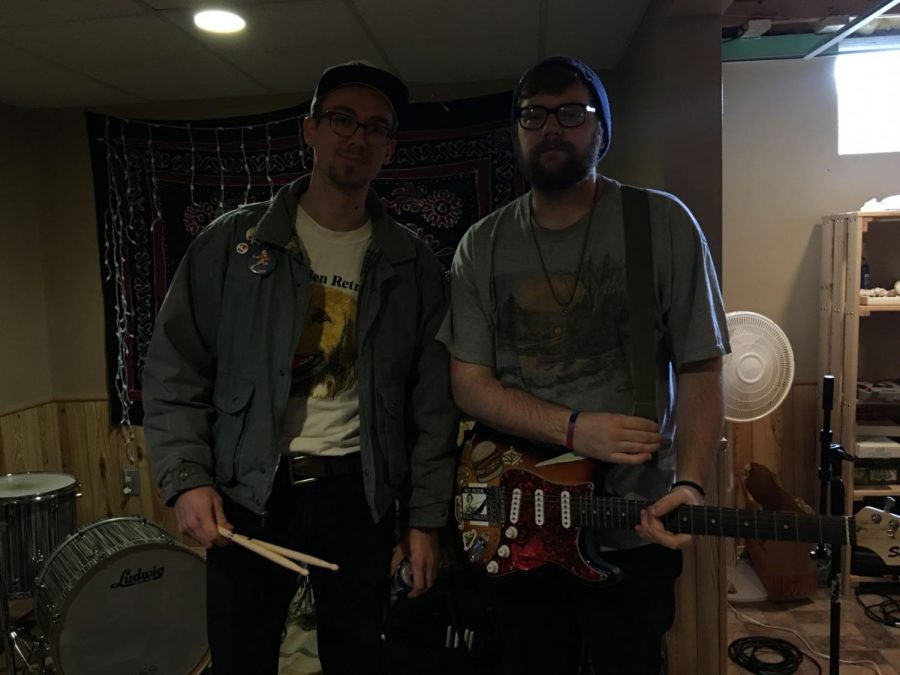 Laissez-Faire is a Bummer Folk-Punk band from Lawrence. There are only two members in the group: Brendan Mott on vocals and guitar and Alan Leiker on drums.

These guys came together and formed their band after Mott’s other band broke up.

“I’ve known Alan since like first grade and he’s back in town. We finally started jamming and it turned into this,” Mott said.

“Laissez-faire” is a French term, meaning to “let things take their course” or “let it be.”

“We were just going through all of these stupid history books and stuff trying to come up with a name for like 12 hours,” Leiker said.

When going through these books, they stumbled upon the term and it stuck.

They don’t really have a reason for playing the genre they do.

“That’s just the style I guess I like to play. It’s fun and simple and still lets me write what I want,” Mott said.

Mott gets a lot of influence from a couple of bands, specifically Against Me, The Front Bottoms, Bob Dylan and Andrew Jackson.

“My influences are like Joyce Manor and Tiger’s Jaw and Title Fight and a bunch of old country and dead rock stuff,” Leiker said.

Their main goal right now is to play their music for anyone willing to listen.

“Some people won’t like it and some people will like it; it doesn’t really matter. I just want to play music for people that’ll listen,” Mott said. Leiker agreed.

People should come out to their shows because they are just generally fun guys.

“If you enjoy having a good time, then come,” Leiker said.

No matter what genre you listen to, Laissez-Faire shows are fun for everyone.

“Even if you don’t enjoy our music that much, come for the atmosphere,” Mott said.

When promoting their shows, they usually use social media, primarily Facebook.

“We’re about to release our EP on a site called Bandcamp and we are going to put it out on cassette,” Mott said.

They put a lot of effort into their new EP.

“We recorded it with our friend Andy Fredrickson in Topeka at his house. Most of the songs are from an album that Brendan put out,” Leiker said.

“Yeah, it’s like half songs I already had, half new songs. It’s rough, not super polished or anything. Just a good rough sounding EP,” Mott said.

Laissez-Faire has a very unique sound. Definitely check out their new EP and try and make it out to a show.