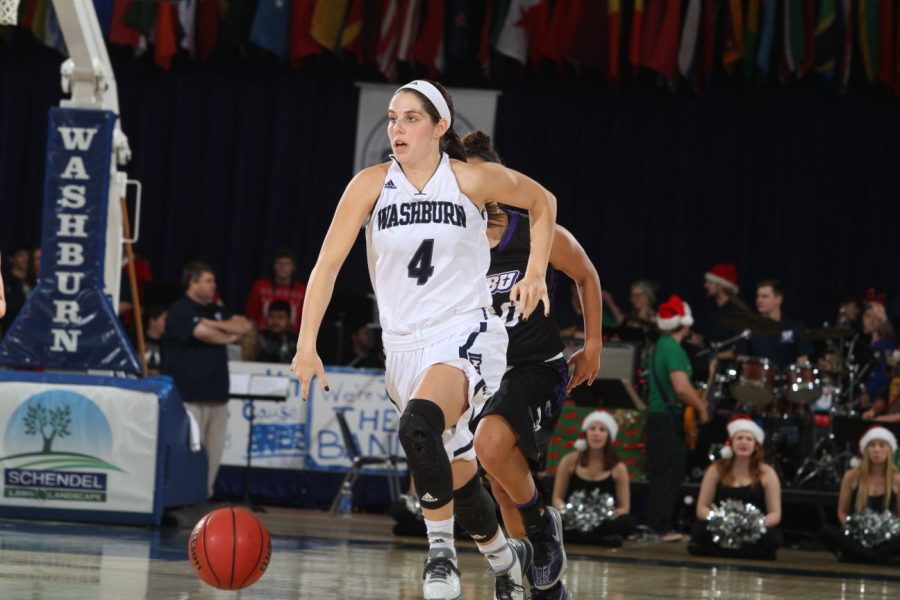 Alex Botkin dribbles down the court after a rebound. Botkin finished the game with 12 points and one assist as well as four turnovers.

The Southern Baptist University women’s basketball team edged out Washburn in the final seconds 64-65 in a heartbreaking loss. Momentum played a large role in the game as points came in streaks for both teams. The lead changed hands 12 times and saw four ties.

The Ichabods fell early in this game, down 8-3 in the early goings, then came back with a change of momentum to take the lead 10-8 and stretched the lead to 6, but the Bearcats brought the game back within reach by the end of the first quarter, cutting the lead to three, 16-13.

The second quarter started with the Ichabods stretching the lead out to eight after six minutes of play, 29-21. The Bearcats then came back with a quick burst of points in a 9-0 run, putting the them on top by one to end the half.

The Bearcats stretched out the lead to eight, 37-29 before the Ichabods made a comeback run to make it a 3-point game. The Bearcats took a 7-point lead with 5:25 left in the quarter, 38-45.

The Ichabods then started another comeback, scoring eight and holding the Bearcats to zero in the final three minutes of the quarter.

The final quarter started with back and forth lead changes with no clear winner in sight as it changed four times in the first four minutes, neither team going up by more than three. The biggest lead in the fourth quarter was held by the Ichabods with a 4-point cushion with 4:10 left in the game, 58-54. Then the Bearcats came back and took the lead 59-58. The Ichabods tied the game with a free throw, then took the lead with a layup 61-59, which was quickly taken away with a 2-point basket from the Bearcats, tying the game at 61. They then took the lead with a basket making the game 63-61. The Ichabods’ Julie Rayn hit a three with only 12 seconds left, seemingly giving the Ichabods a win 64-63, but with 2 seconds remaining the Bearcats laid in a basket to win the game 65-64.

Cindy Demosthene led the Ichabods with 13 points, making five of six shots. Erika Lane and Alyxis Bowens each had 12 in the game. Bowens shot well from the field (five of nine) and Lane was four of 11, missing all three shots from behind the 3-point line but hit all four free throws. Jayna Smith led the defensive effort with 6 steals in the game and added seven points to the board as well.

The Ichabods will be back in action Wednesday, Feb. 3 at home in Lee Arena facing Pittsburg State University. The Ichabods are now 12-8 this season, 8-6 in the conference, while the Gorrillas are 17-4 this year, 11-4 in the conference. They are currently riding a six-game win streak.