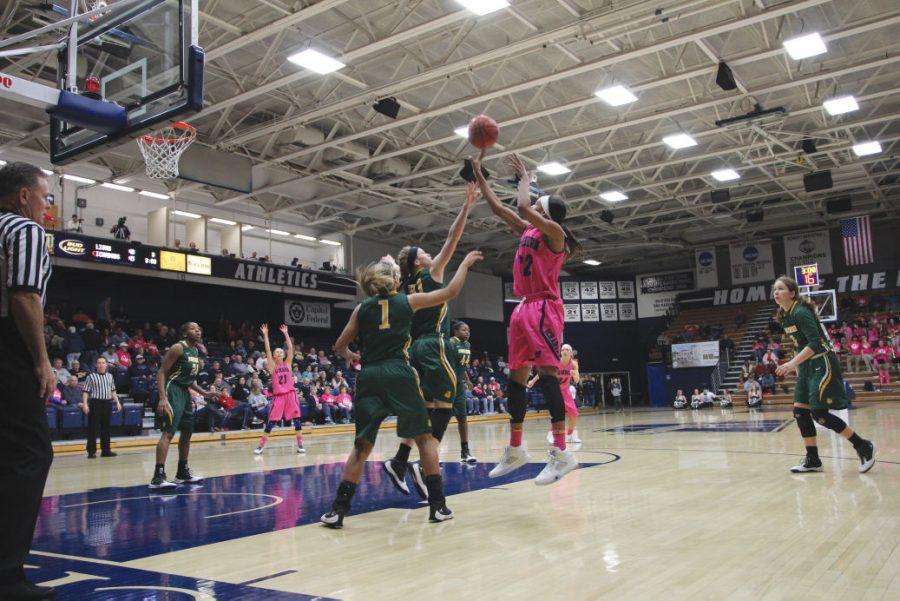 Alyxis Bowens takes a jumper over two Lions in Saturday’s loss. Bowen had 12 points, shooting six for 10 from the field.

The Washburn women’s Basketball team fell in a close game to the Missouri Southern Lions 73-67, snapping the Lions losing streak and extending the Ichabods’ losing streak to three games.

For the first few minutes the game was tightly contested, neither team gaining an edge, but the Lions took a five-point lead with six minutes left in the first quarter, 11-6.

Washburn retaliated with basket after basket, bringing the game within one at 15-14 and held the Lions scoreless for the remainder of the quarter, finishing with a run of their own, Washburn in the lead 18-15.

Washburn held the lead for the entire second quarter, expanding their lead to six at one point, but the Lions weren’t giving up. By the end of the quarter they brought the game within two, making the halftime score 31-29, Washburn.

The Lions tied the game coming out of half at 31 but quickly fell back down to a four-point deficit as Washburn grinded out two shots in the next few minutes.

The Lions kept the game close through the third quarter not letting Washburn jump to a lead of more than five points with 2:20 left in the quarter, 50-45. The quarter ended much the same as the others with the Ichabods holding on to a narrow lead of 51-55.

The Ichabods couldn’t score for three minutes to start the fourth, giving the Lions a few baskets and free throws, tying the game at 55 with 7:29 left in the game.

The Ichabods then were in foul trouble and free throws became the enemy as the Lions jumped to a seven-point lead with 5:14 left in the game. They expanded it to as much as nine before the Ichabods cut it to four with just under two minutes remaining. That’s as close as the Ichabods would come for the rest of the game because they were forced to foul. The game ended 73-67, the Ichabods falling by six.

Washburn had two players in double digits. Erika Lane hit two threes, shooting seven for 11, and three of four from the free throw line, giving her 19 points with an additional five assists. Alyxsis Bowens had 12 points, shooting six of 10 from the field.

The Ichabods will be back in action on Wednesday, Feb. 10 at home in Lee Arena against the University of Central Missouri Jennies, who enter the game 8-13, 7-9 in the conference–a key game for conference standings.