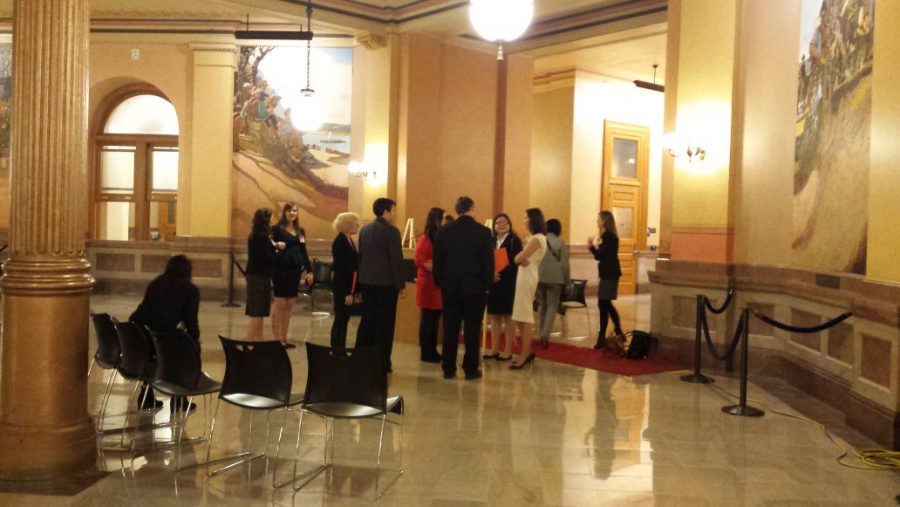 URGE: The members and students affiliated with the Kansas branch of URGE meet after the press conference to discuss the rest of the day's events.

On Monday, Feb. 8, the Kansas branch of Unite for Reproductive and Gender Equity met at the Kansas Statehouse to discuss reproductive rights and recent legislation attempted by Gov. Sam Brownback.

Over 50 students from different universities across Kansas attended the programs held at the Statehouse. Rep. Gail Finney, representative of Kansas’ 84th district, also joined in on the conferences, as well as supporters of Planned Parenthood of Kansas and Mid-Missouri (PPKM) and representatives of Trust Women.

The day started with many of the students having group discussions and becoming acquainted before the day’s activities began. The organization held a press conference with many different speakers discussing the state of reproductive and female health care in Kansas. One speaker in particular was Finney, who had plenty to say about her disappointment with her fellow legislators.

“These legislators are flat out tripping,” Finney said. “Kansas has been chipping away at access to reproductive health care for a long time. Recently, some of my colleagues have upped efforts to do everything they can to make it harder and more expensive to access vital and constitutionally protected health care.”

Finney also commented on the large amount of restrictions made by Kansas in recent years.

“Kansas has passed more restrictions on abortion than any other state over the last four years,” Finney said.

The representative had to leave quickly after her speech, but she set the stage for many other speakers to speak on their dissatisfaction toward recent events in Kansas Legislature.

Another key speaker was Erendira Jimenez, the student leader of URGE at Wichita State University. Her location has given her knowledge of the difficulty of not having access to proper care.

“I know from experience, living in Western Kansas, that it is very difficult to have access,” Jimenez said. “There aren’t many providers.” She spoke specifically on the issue that people’s feelings toward female health care is based around biased and negative stereotypes.

“We’re hoping that we can convince and be able to remove the stigma it currently has,” Jimenez said.

Jimenez hopes that removing this stigma will help legislators understand what bills would be detrimental to their state.

“I have known a lot of former highschool students that have, years later, realized that they have reproductive issues that they were never told about, or never even knew were possible,” Jimenez said.

There were also representatives from other women’s rights organizations such as Planned Parenthood of Kansas and Mid-Missouri who spoke about services the organization provides that help women nationwide.

After the press conference the students of URGE then had meetings with legislators to discuss a bill that would repeal a ban on the use of telemedicine for medication abortion. This ban has made it extremely difficult for patients in rural parts of Kansas to access abortion. Students and advocates also visited legislators and asked them not to support the proposal to defund Planned Parenthood in Kansas.