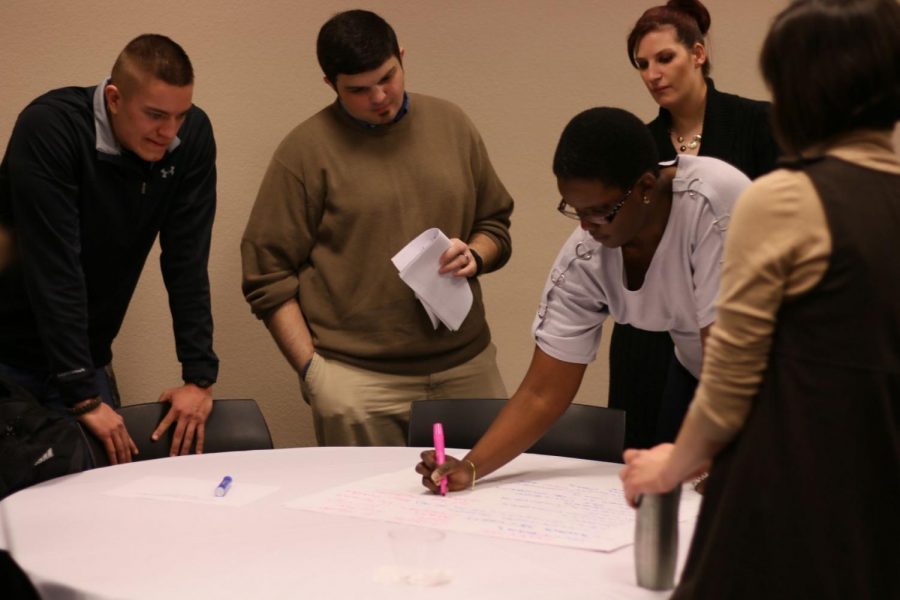 A group of students writes down ideas about diversity to be shared.

After protests in response to previous racial events occurred on the University of Missouri’s campus last autumn, Washburn, along with several other campuses in Kansas, was inspired to create an event to encourage discourse about diversity and social justice.

WSGA President Blake Porter said it began with a meeting between the department heads across campus in the midst of the events at University of Missouri. In these meetings, they discussed if this was an issue at Washburn and if they noticed these situations happening on campus.

“We decided that based on what we had or had not seen, students deserved to voice some input on it,” Porter said.

The first installment was a DiversiTea event held by the Diversity Initiative program.

Porter said, “We had some people talk about their experiences. We generated questions from that.”

Those questions were used as the base for a group dialogue at the second Courageous Conversations event that took place Dec. 1, 2015.

“It was a pretty good turnout. We didn’t have as many students as we wanted to, but there were a lot of faculty members there. Dr. Farley was there and most of his executive counsel. It was a good discussion,” Porter said.

The next Courageous Conversations meeting will be held at 7:30 a.m. Feb. 2 in the Bradbury Thompson Alumni Center. The discussion will center on what can be done to address some of these problems and ways Washburn can be even more welcoming and inclusive as a campus.