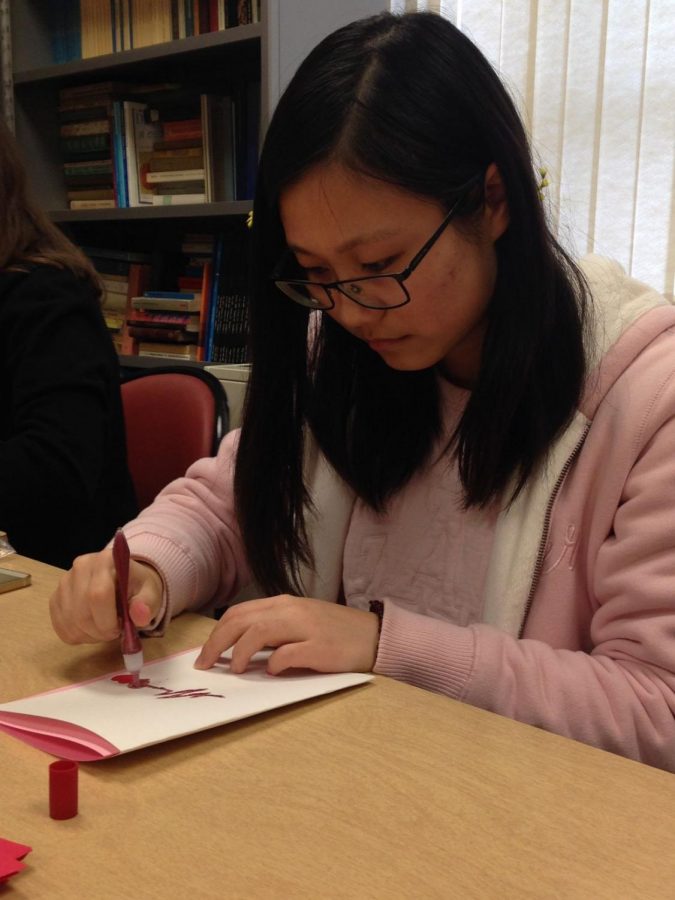 Xinyi Cao, English major, creates one of the cards that the French Club will be selling on Feb. 10 from 11 a.m. to 1 p.m. in the Memorial Union.

The French club will be selling cards and bracelets in Memorial Union on Wednesday, Feb. 10 as a fundraiser for the club. The cards will be one dollar and the bracelets will be two dollars.

“We actually started with the idea of just cards because we know people find French a really romantic language,” said Thalia Fenton, senior French major. “We wanted to do something to fundraise for our club and … incorporate French … so we’re doing cards with French phrases on them, and bracelets just kind of followed suit because we thought they would sell too.”

The club will use the proceeds from the fundraiser to buy supplies for their Mardi Gras party, which is also an outreach event that local high-school French clubs and other students from Washburn can attend. Courtney Sullivan, professor of modern languages who did her undergraduate studies in New Orleans, will give a presentation over Mardi Gras, first in French, then in English for those who do not speak French. There will also be snacks and music. The party will be  from 2:30 p.m. – 3:30 p.m. Feb. 8 in Morgan 155.

While students do not need to be fluent in French, Fenton, co-president of the French club, advises at least some experience with the French language.

“We try and recruit students who are in their first year of French or had at least prior experience, because the purpose of French club is to practice their linguistics skills and their language skills – like speaking, listening –so they need to be at least familiar or learning French,” Fenton said.

“This is the best chance to get close to the French country and the language and also have a lot of partners and classmates to help you study French, and you can also improve your own language skills during this process,” said Yeching Zhai, French club member and business administration major.

Fenton said that one of the best parts about French club is seeing students grow.

“A benefit for me is seeing them having fun learning another language,” Fenton said.

“I think this is a good opportunity to share the experience of learning French,” Zhai said. “It is a good platform for us to make friends and also improve our French.”