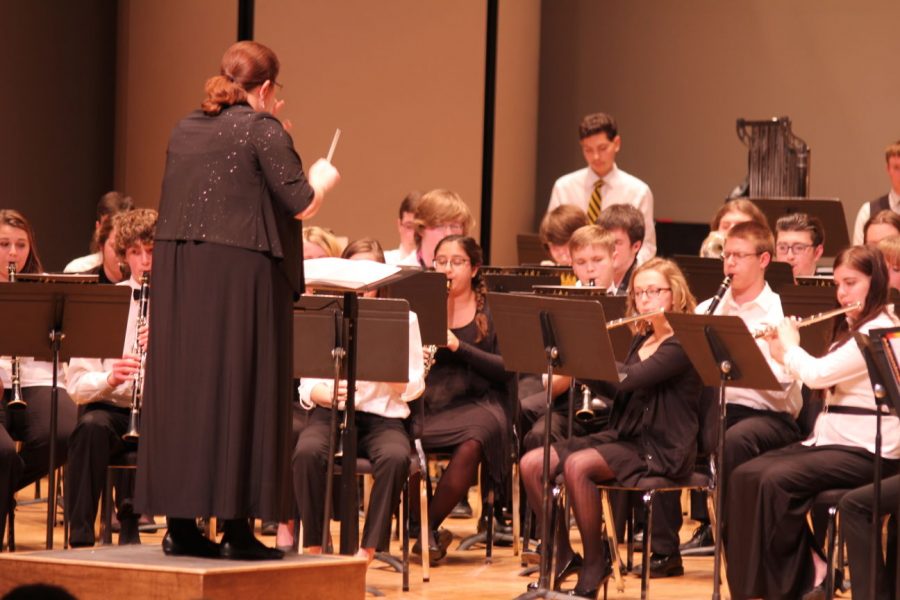 White Concert Hall hosted the annual Washburn Youth Wind Ensemble at 7 p.m. Wednesday, Jan. 27, which featured local middle school and high-school ensembles from Topeka and a few surrounding towns, including Holton, DeSoto, Leavenworth and Eudora. The event was free of charge and open to the public.

The Youth Wind Ensemble is a volunteer opportunity for students that has a large turnout of participants each year. Students from middle school and high school joined together to perform for their family and friends.

Each of the pieces contrasted to create an even blend of music. For many of the middle school students, it was their first time performing with other students outside their own school.

There was a short intermission between the middle school and high school groups. During this time speakers discussed how important it is that the parents keep their children in band, explaining that it creates lasting memories and helps to excel academics.

For many of the high school students, the event counts toward lettering in band for participation in extracurricular events.

Topeka High School student Ethan Spencer-Coleman explained how the concert was an improvement from last year.

“Last year we had some hiccup,” Spencer-Coleman said. “I felt like there were some things we could have done better, but that’s always the case. I felt like we did well.”

Many of the students commented on their performance compared to last year, saying that each person played at their best ability.

“I think we did really well on most of the parts,” said Eric Robles, Leavenworth High School student. “There were some things for me that were pretty difficult, but it was a good performance.”

Robles commented on the different arrangements based on his favorites.

“I really liked ‘The Cave You Fear’ because I like the sound of it and a lot of the parts I have are really important,” Robles said. “I think ‘Melodious Thunk’ was a pretty close second.”

The event concluded with a “thank you” to the parents for keeping their students in band and a final standing ovation for the middle school and high-school performances.