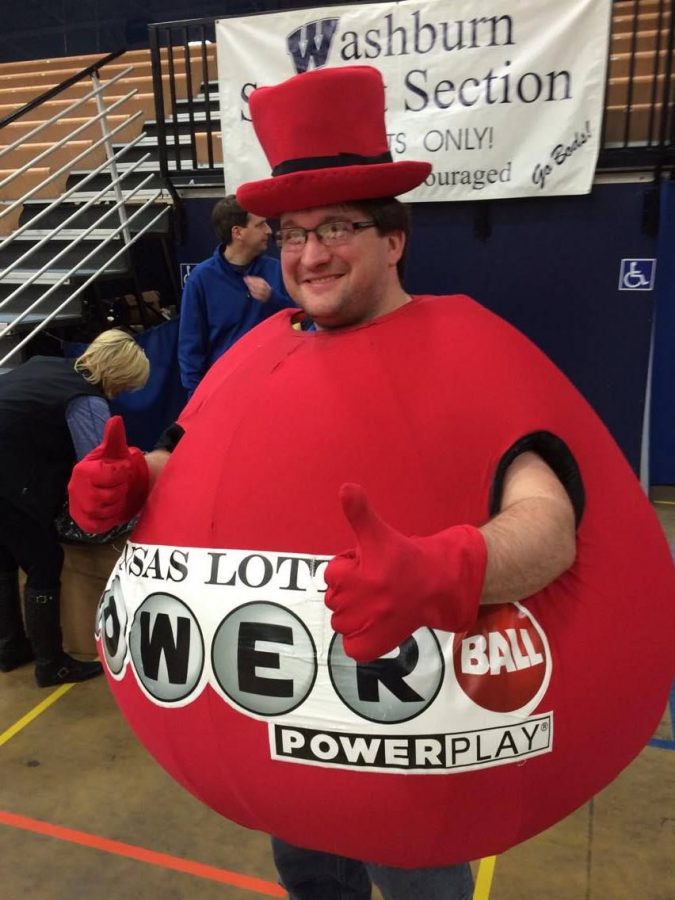 Powerball, along with several other sponsors, assist in making this trophy tour around the cities in both Kansas and Missouri possible.

The Royals’ World Series trophy visited Washburn University’s Lee Arena for a couple hours on Feb. 24 during the World Series Powerball Trophy Tour of 2016. Over two hundred individuals, mostly members of the community, gathered inside the Petro Health Center and waited for the tour’s 6 p.m. start time.

The tour arrived on Washburn’s campus after departing Hutchison at 1 p.m. earlier the same day. The Powerball-presented tour began Feb. 8 in Warrensburg, Missouri and is scheduled to make its final stop on Feb. 27 in Independence, Missouri.

This tour allowed fans the opportunity to take a photo with the trophy and either buy a framed, physical copy for $10, have it emailed for $15 or have a photo taken with a personal device. The only rule was the limitation of one photo per group.

The tour is sponsored by several different organizations including Kansas Lottery, Planet Fitness, Missouri Lottery, Pepsi and Academy Outdoor + Sports. Members of the Royals staff accompanied the tour while the players and coaches were tied up in spring training.

Although the players and coaches couldn’t be present, one Royals-related celebrity was available. KayCee Baseball, the man who displays the giant “W” on the Hall of Fame sign during Royals victories, stood in the center of Lee Arena and posed with numerous fans.

Mulen’s favorite player is Alex Gordon and he spends a great deal of money attending Royals games every summer.

“My favorite thing about going to a game is the experience of seeing them play and interact with the crowd,” Mulen said. “It’s the overall ambiance of the stadium that I love.”

Another young fan who arrived a few hours early was Mia Hartung, a recent Kansas University graduate, who now works at the Kansas Bureau of Investigation on the Washburn campus.

“For a huge fan, seeing the trophy in person is a great honor,” Hartung said.

Hartung has been a Royals fan since she transferred to KU in 2013. Her first game was in spring 2014 after she won four front row seats tickets from a Wayne Simien free throw contest at a KU basketball game.

The majority of the attendees were community members and families with young children. One of these individuals was Topeka native Megan Maloney and her son. The two now reside 30 minutes away in Holton.

Maloney said she cried during the loss in the final game of the 2014 World Series and then cried again when the Royals stole the championship title the following year.

“Even before postseason I knew in my heart they were going to win the 2015 World Series,” Maloney said. “It wasn’t a thought; I just knew.”

Mixed in with the community members were a few Washburn students including Tylor DeNoya, senior mass media major.

“I had no idea what to expect, but I’m excited I’m finally somewhere where something exciting is happening,” DeNoya said.

The 2016 season is scheduled to commence at 7:35 p.m. Sunday, April 3 when the Royals will take on the New York Mets at Kauffman Stadium.