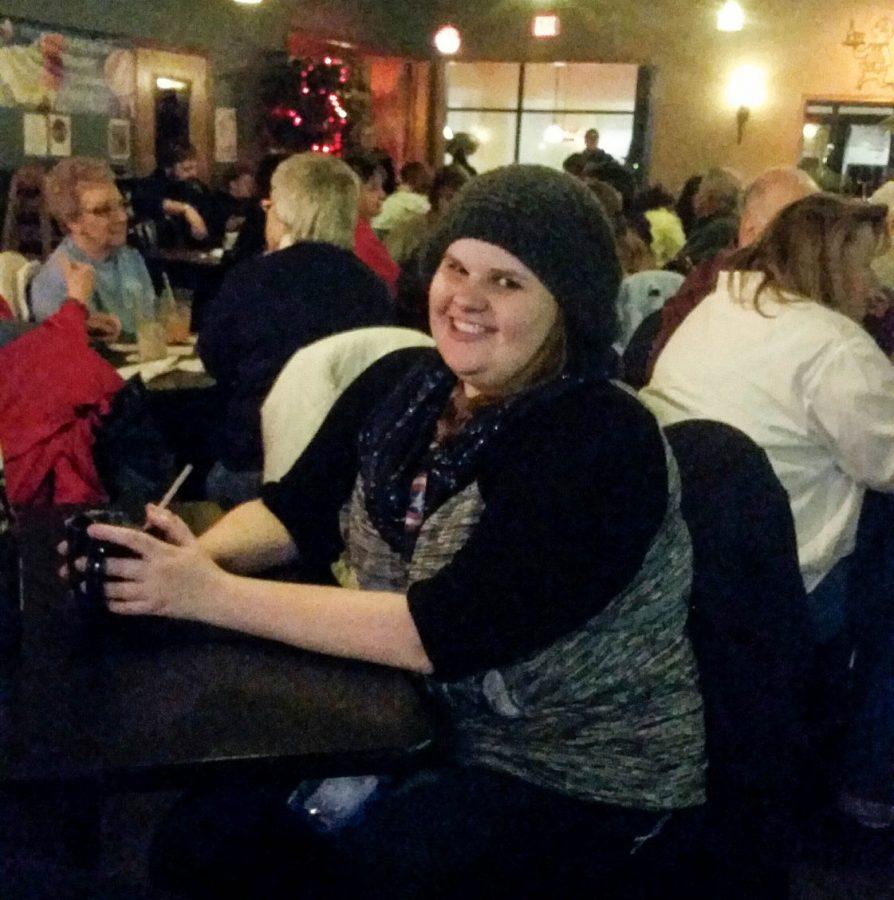 Natalie Engler, sophomore criminal justice major, enjoys her hot chocolate while watching The Woodvalley Pickers. She has been a long time fan of bluegrass, and gave the band two thumbs up.

The Woodvalley Pickers, an up-and-coming band in Topeka, performed at the Classic Bean from 7:30 – to 11:00 p.m. Feb. 12, filling every seat in the establishment.

This bluegrass band has been together for over five years, and each player comes from a different city. The instruments ranged from a mandolin, banjo, guitar, violin and bass.

“The drinks are great, and I could see how the place was packed,” said Natalie Engler, sophomore criminal justice major. “I personally love bluegrass, and this band was really refreshing to come out and see.”

Wittebort said that the band gets together at least once a week to practice. Some covers are done last minute, with little practice. They have performed in many places in Kansas, and just released their first album.

The band has played at the Classic Bean before, in November and December of 2015, and has five more visits planned in 2016. Their setlist is always changing, including covers from many other bluegrass artists.

The band first started when Gleue and Wittebort met up at a high school reunion. They had tried recording their own folk music when they were 14 years old but were not happy with the outcome.

They added the other members later, and in June 2014 the band was honored as “Performer of the Year” at Wheatstock X, an annual American festival.

The Woodvalley Pickers’ first album “Knockin’ On Your Door” came out in 2015 and includes both covers and one original song by Shirley Wittebort. Albums were for sale from the band for $10 and can be purchased online on the band’s website, WoodValleyPickers.com.

The Classic Bean features live music every weekend, including performers from Topeka. A stage is set up to give customers of the coffee shop a chance to watch for free from tables and couches. Food and an array of drinks are available for customers, including alcohol, tea and coffee.

The Classic Bean was established in 1993 and started out with poetry performances, jam sessions and drum circles before starting to take in artists around Topeka to perform.

Performances start at 7:30 p.m. on Friday, Saturday and Sunday. TheClassicBean.com features an entertainment calendar for upcoming events, stating the name of the band and the music genre being covered.

“This could be a great opportunity for upcoming bands, and it’s really fun to come and experience,” Engler said.