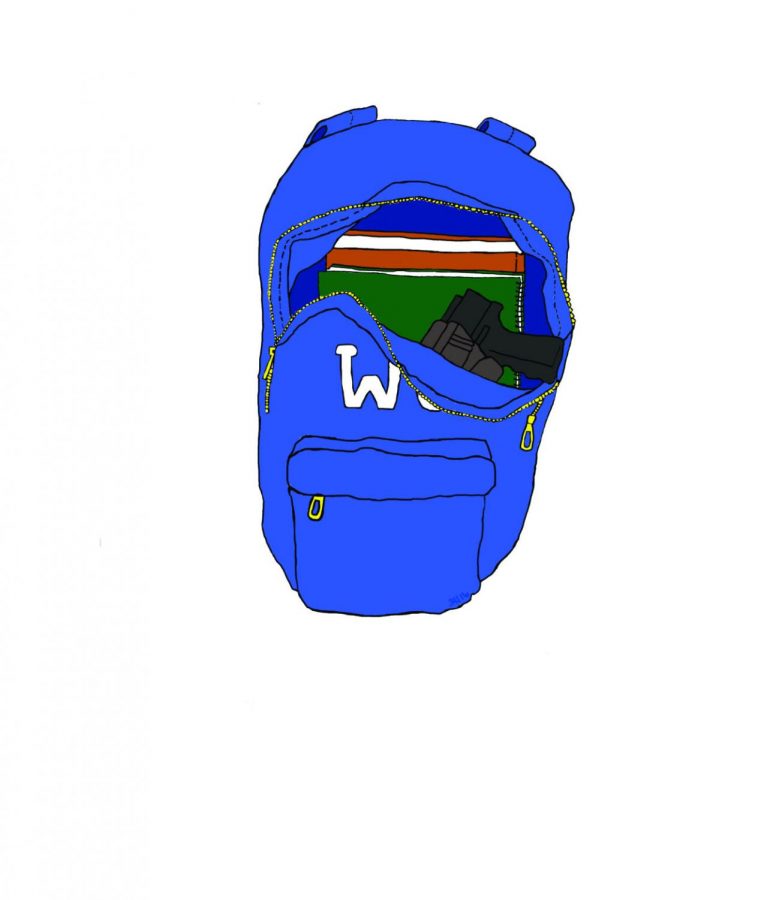 Future Glimpse: the graphic represents what may become a common sight on Washburn campus after July 1 2017.

Recently proposed Senate Bill 248 would prevent conceal and carry on college campuses across the state, but the odds are not in favor of its passing.

According to the National Conference of State Legislatures, “In 2013, five states introduced legislation to prohibit concealed carry weapons on campus. None of these bills passed.”

Prospects look grim to those desiring a repeal or revision of the law.

“…From what I know of the Kansas Legislature, I would doubt it,” said Jim Schnoebelen, a Washburn professor of communication who also teaches political communication.

Should the current law go into effect on July 1, 2017, it is up to the administration of each university to set policies that regulate guns on campus. Faculty have voiced concerns to administration in open fora, however concrete decisions do not seem to have been made yet.

“Lots of questions, not a lot of answers,” said Jennifer Ball, Faculty Senate President and economics professor at Washburn.

Jennifer Ball shared that there was a small study done of campus faculty, but the response rate was so low that it was untrustworthy. Her personal opinion is that the majority of faculty would prefer guns not be allowed on university property.

Staff and students alike feel uncomfortable with this situation according to surveys recently released by the Docking Institute.

Unless students, faculty and concerned citizens let their voices be known, the current law will continue and allow unregistered conceal carry on campuses starting July 2017. This includes anyone, regardless of criminal background, drug history or mental state.

Those desiring to let their voices be heard about changing the law may start their own group or get involved with an existing one.

“If people are interested in seeing that exemption, they need to get behind that and support that,” said Kerry Wynn, professor of history and a member of Cancel Campus Carry.

Proponents of the law are firm supporters of the Second Amendment’s phrase “the right of the people to keep and bear Arms shall not be infringed.”

Cancel Campus Carry is the local Washburn group found @cancel_carry on Twitter. On Facebook there is a Kansas Against Campus Carry group. The Kansas Coalition for a Gun Free Campus is a Facebook group and an organization. KCGFC had a rally Feb. 8 in Lawrence on the University of Kansas campus.