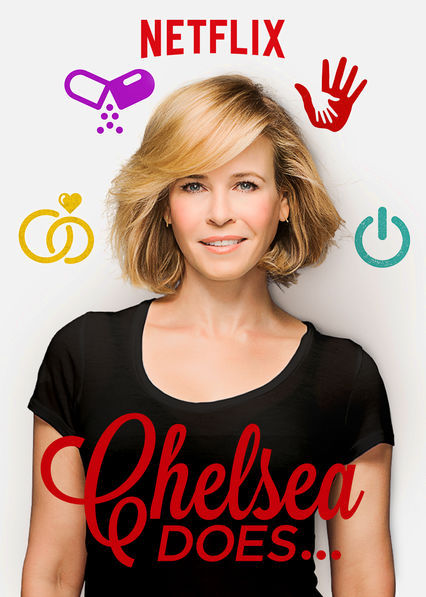 A new documentary series, "Chelsea Does".

Chelsea Handler just released a documentary series on Netflix called Chelsea Does. There are four hour-long episodes that focus on her exploring many different factors in life that she hasn’t explored before. Viewers are exposed to a completely different side of Handler as she looks into marriage, the basics of technology and how to use it, racism and drugs. She is even seen smoking weed with Willie Nelson in one of the episodes.

The first episode is about marriage. Handler asks people who are in love or have ever been in love about marriage and what it means to be married. She is not married and does not have a full grasp on why people do get married. She says she views marriage as a “money-making scheme.”

“I think part of the reason I would never have contemplated getting married previous to this age is because I didn’t want to buy into all of this,” said Handler.

When asked about his own views on marriage, Kody Stadler, a junior English major, said, “I’d have to say that it really just depends on who you are and what you want. I know that sounds like a really cliche answer, but I feel like marriage as an institution is often forced onto couples as being the ‘appropriate’ thing to do. But, at the end of the day, it’s just benefits. It’s not proof of real love.”

Lisa McDonald, a freshman Spanish major, said, “Marriage is primarily dependent on cultural norms based on religion, politics, and family dynamics. Each person, based on their cultural upbringing, will have a different concept of what marriage means in the private and public realms.”

Freshman Sydney Donaldson, a music education major, said, “I think marriage is an incredible thing. I think it’s a gift from God and it’s a really precious thing when you find the person you love and can share your life with that person.”

Handler does say that she would like to be married someday, but she has been against the idea of getting married herself for so long that she doesn’t believe anyone would believe her if she told them she was getting hitched.

“My view of marriage is quite simple,” said Trey Flair, a junior marketing and entrepreneurship major. “If two individuals mutually love one another, regardless of their views, they should be able to marry. However, marriage isn’t necessary. If you are truly devoted to an individual, and can remain loyal to that individual than you do not need marriage to solidify that mutual passion.”

This Netflix series is a cross between a documentary and a reality television show. It offers access to view a side of Handler that the public has not seen before.