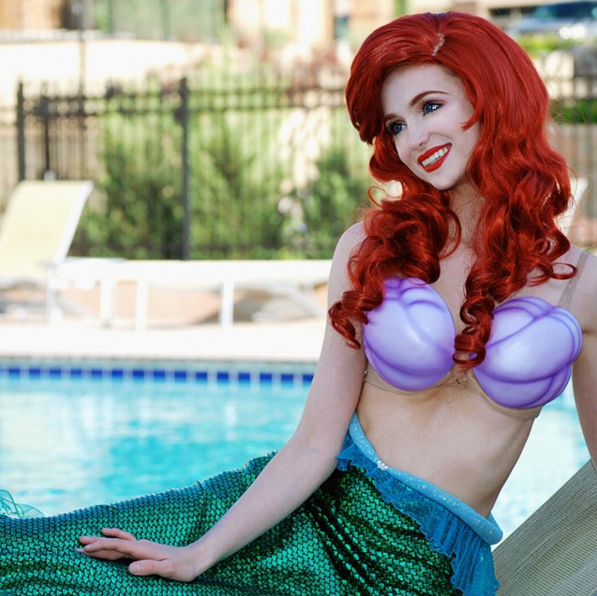 Sarah Ingle can transform into nine different Disney princess on a whim. Ingle’s ability to become a princess was an expensive tranformation, costing her thousands of dollars.

Body issues can play a big role in many people’s lives. Sometimes it’s hard to be fully satisfied with how you look. This affects both girls and boys. People who act on this sometimes pay a lot to look different than they do naturally.

Although this is true, people don’t always get plastic surgery because they have issues with their body. A 25-year-old woman, Sarah Ingle, recently spent over $14,000 to look like a Disney princess.

Her full-time job as a marketing manager allowed her to spend over $1,500 on each of her 17 different outfits and 16 wigs. These outfits along with a lot of makeup and contouring allow her to appear as nine different royal Disney princesses. It takes her about three hours to fully transform into each princess character.

Her obsession with Disney princesses and her commitment to looking like them offers her a unique side job of being an entertainer at children’s parties with her business, Princess Ever After.

Through this business she is able to charge $145 for her appearance at various parties. She also visits children in hospitals who are sick and volunteers at events where a princess might be wanted.

She does these things because she feels like that is what she was born to do. It’s more than a hobby. By getting surgery she was able to transform her facial structure into the typical face of Disney princesses.

There have been many other cases of people getting countless surgeries to change the way that they look.

At the end of 2015 a woman spent $120,000 to look like a cartoon character, and she even got six ribs removed. This woman didn’t like how she looked and wanted to get these surgeries to appear on the outside as she felt on the inside. There was also a man who spent about $100,000 to look like Justin Bieber.

“We grow up seeing Disney princesses and other cartoon females portrayed with unrealistic features,” said Lisa McDonald, freshman Spanish major. “But it gets ingrained in our heads that to get the prince we have to look like a princess, because who really wants the pauper?”

This is true – many women struggle with self-confidence and have issues fully accepting the way they were born. That is not to downplay men who face these struggles as well, but society puts a lot of weight on woman to look and be a certain way.

Sydney Donaldson, a freshman music education major, said, “It’s her body. I think that’s a little outrageous, but if that’s what makes them happy then that’s fine with me. I think there’s always some standard we’re all trying to reach, but some people just take it to extremes to get to that place where they’re satisfied with the way they look. It obviously has a bigger hold on some people, but like I said, if that’s what you want to do then that’s fine. I would never take such drastic measures to change my appearance, but that’s just me and I’m happy with the way I look so I don’t feel the need to do crazy things to look a certain way.”

“Body image has become something that women, at least in my sphere of experience and influence, have come to recognize and start to try to reclaim,” said Madi Weidenbach, freshman English major. “However, we have a long way to go before every woman is happy with her body without feeling like she has to make major changes. I say this not against any woman who wants to get dolled up every time she leaves home or enjoys spending time in surgery to acquire different facial features – I say it against a society that makes us feel like we have to live up to certain standards to appease others.”