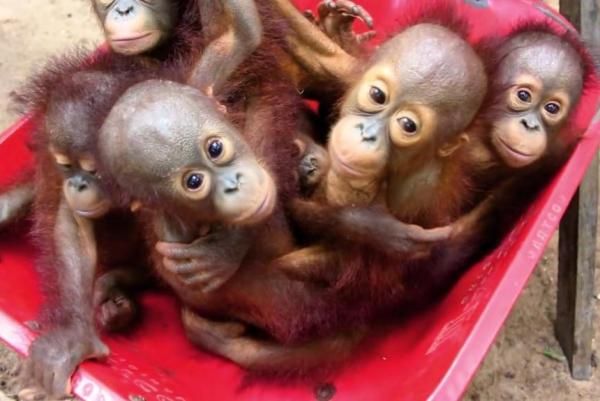 Baby orangutans are learning crucial survival skills at Indonesia's newly opened forest school, which was created by the International Animal Rescue. Currently, around 100 orphaned orangutans live at the school.

Alan Knight, CEO of International Animal Rescue, said during an interview with The Daily Mail, “As time goes on they will learn from the other orangutans how to climb and forage for food, just as they would in the forest. Young orangutans learn a great deal by imitating and copying each other, just like human children. They will also gradually shed their dependence on their human babysitters as they develop bonds with each other.”

Illegal poaching and loss of habitats has brought this orphan problem to Indonesian orangutans. The International Animal Rescue stops the deaths of many orphaned orangutans by bringing them to this safe, forest school.

During an interview with Sky News, project director Karmele Llano Sanchez said, “When the orangutans arrive here we try to give them an environment that is as natural as possible. That is why we created the forest school. What we want is to try to replicate what an orangutan will do in the wild, so this is what they will learn during the process of rehabilitation.”

“I think [the forest school] is kind of cool. I mean, I don’t know if I lived there if I would participate in it, but I think it’s a cool idea,” said Abbie Compo, a junior business major. “I also think it’s a good idea for [the orangutans] to learn that and to better themselves. If Indonesia has a habitat problem, then they need to consider what the animals are going through.”

The forest school relies on help from local volunteers and workers to care for the apes every day. Workers transport the apes around the school, which consists of a forest and a sanctuary, in wheelbarrows for easy transportation.

MacKenzie Mapes, a junior human services major, said she thinks that this school will benefit the orangutans in the long run, but Indonesia should also be putting their people before the orangutans.

“I think the school is pretty cool, but I also think there’s more they could do for humans,” Mapes said. “It’s a good idea and I’ve never heard of it before.”

The school currently is housing 102 orangutans in hopes to release them into the wild after a projected seven to eight years. However, a small number of the orangutan students are not currently attending the school due to injuries.