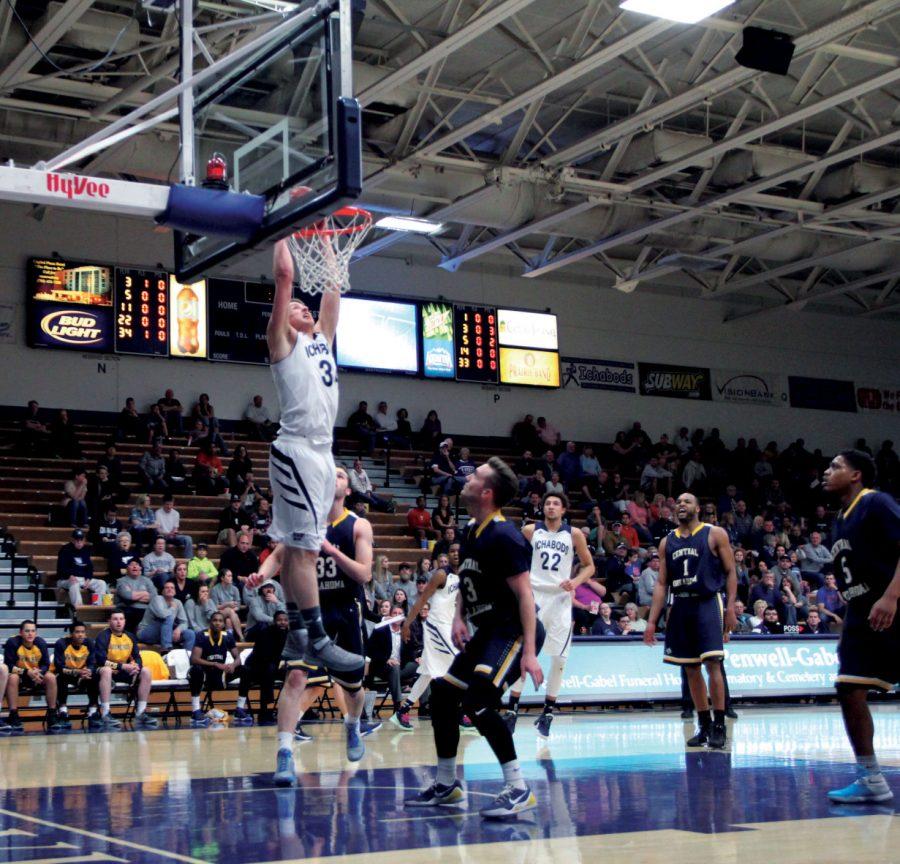 Jeremy Lickteig slams home a two handed dunk against the Bronchos. It was his only make on three attempts but Washburn’s only dunk of the game.

The Washburn men’s basketball team came up short in their second half rally, losing to the University of Central Oklahoma 60-71. The Ichabods had cut the lead from 18 points to eight in the final minutes of the game, but could not come closer than a three-possession difference.

The game was one-sided from the start;Washburn’s only lead came in the first minute as they were the first to strike.

The Ichabods kept it close for only the first five minutes before Central Oklahoma shot their way to a seven-point lead at 17-10, and then a 10-point lead, 20-10, with 14 minutes left in the first. The Ichabods brought the game within four, 20-24, with eight minutes left, but came no closer for the remainder of the game. They quickly fell to an 11-point deficit at halftime.

The lead expanded to 18 for the Bronchos early in the second half as Washburn struggled to score. The Ichabods were down by more than 12 for most of the second half until a small scoring outburst brought them within eight points with a minute and a half left to play. They fouled to regain possession of the ball but still fell behind by 11 as time expired.

The Ichabods struggled to hold onto the ball with a total of 20 turnovers, four courtesy of Javion Blake and three from Robert Christopher. Blake made up for it by leading the Ichabods in scoring with 12 points. He shot two of nine from the field, but found redemption at the free throw line by making seven of his eight attempts from the stripe. Christian Ulsaker and Tyas Martin were tied for second in scoring with eight points.

Martin shot four of six from the field and Ulsaker made three of eight, but had seven defensive rebounds. Brady Skeens was limited on attempts due to the Bronchos inside defense but made the most of it by hitting two of two. He struggled from the free throw line, only making one of four. Skeens also had six rebounds, one of which was offensive.

For the Bronchos, guard Seth Heckart had 19 points from five of 10 3-pointers and two layups out of 12 overall shot attempts.

Jacob Strasse also shot well, hitting five of eight for a total of 12 points. Jared Barstow brought in eight rebounds for the Bronchos.

The Ichabods’ head coach, Bob Chipman, said the pace of the game and defensive struggles hurt the Ichabods throughout the game.

“We got to look at film,” Chipman said. “We were really out of control on offense and throwing it away. We’ve got to slow down. Defensively, at times there’s a little more fight, but when you’re playing so bad it’s hard to play too hard on defense. It was a little better fight defense. We have to play better defense and slow down on offense. I mean thirty turnovers, that’s where we’ll start against Missouri Western.”