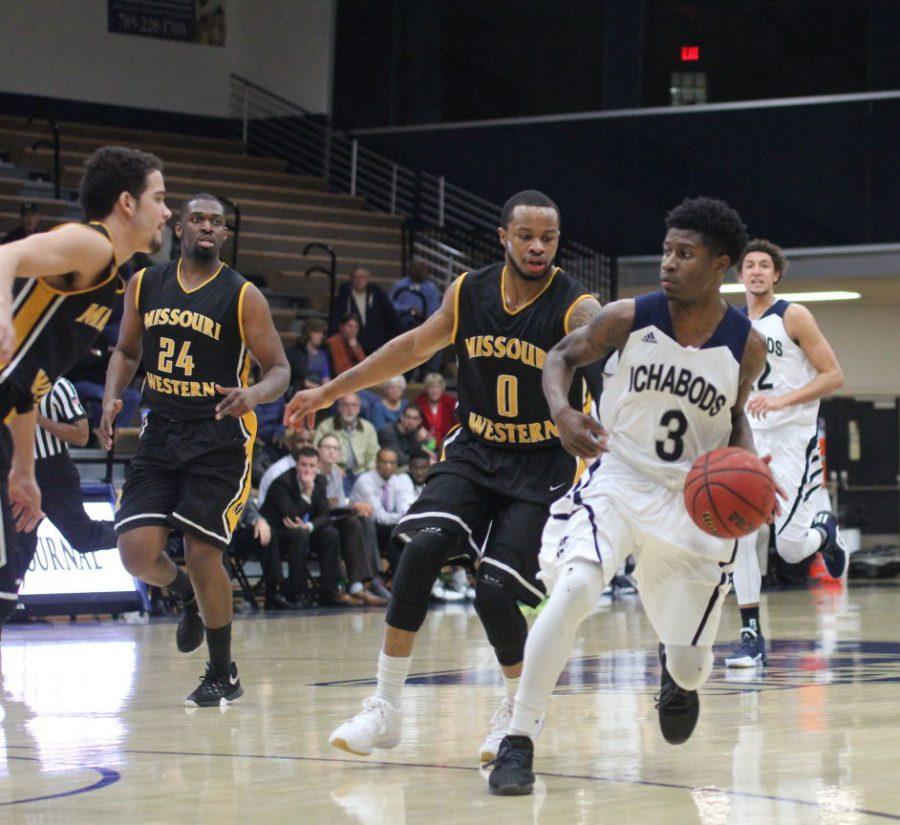 Randall Smith drives in against the Griffons Tuesday night. Smith had six points over the course of the game.

The Washburn Ichabods men’s basketball team lost to the Missouri Western Griffons, 54-70 Mar. 1 in the first round of the MIAA Tournament. The Ichabods came into the game 15-12, 11-11 in the conference, while the Griffons came in 11-17 overall and struggling in the conference at 9-13.

The game started as an offensive struggle for the Ichabods, not being able to score, and it became a very one-sided game in the first 10 minutes of the first half as they fell down 6-20 to the Griffons before clawing back to a near one-possession game. The Ichabods had fallen to double digits with 12:18 left in the first half, 16-6.

The second half started with the Ichabods cutting the lead to single digits, 19-28 before the Griffons hit a three to put them up by 12 yet again. The Ichabods offensive struggles may have been in part to a large number of offensive fouls.

The Griffons extended their lead to 15 with an additional three-pointer, putting them up 34-19 with just over 16 to play.

Cameron Wiggins fell to the ground on a fastbreak as the Griffons hit another three, he appeared to have a foot injury and was replaced by Javion Blake with 16 minutes left to play in the half.

The Ichabods struggled greatly on offense and couldn’t hold the Griffons on defense, and eventually fell to down 19 with 12 minutes remaining in the second half, 28-47.Emeka Ogbonna then converted and and-one after an offensive rebound that gave the Ichabods a bit of a start, but another three by the Griffons quickly shut down the hopes of an Ichabods comeback.

The Griffons lead by 21 with 10 minutes remaining in the game, 52-31. Emeka Ogbonna and Tyus Martin had back-to-back baskets for the Ichabods, bringing the game to a 17 point deficit before they were taken out with 9 minutes left to play.

The Ichabods couldn’t cut the lead down to less than 17 as most of the second half progressed. With 4:30 left the Ichabods were down 18, 40-58, and a comeback didn’t seem to be in the cards for the Bods.

The Griffons extended their lead to 21 with just under 4 minutes to play, 61-40 before Cameron Wiggins hits a three from the corner to cut the lead to 18 again. A pair of free throws put the Griffons back up by 20 before Tyus Martin hit a two-point jumper from the top of the key, making the game 45-63 with just over 3 minutes to play.

The Ichabods started to foul with just under three minutes to play and the Griffons converted most of their free throws, putting the game back up to a 20-point deficit for the Ichabods to overcome, 47-67.

At the one minute mark the game was a little closer, only a 16 point deficit, 52-68 Griffons and from there they ran down the clock, only making one more shot for each team, making the score 54-70 to end the game and the Ichabod’s season.

The Griffons will move on to play Friday, March 4 in the MIAA quarterfinals game. The opponent and location have yet to be determined.