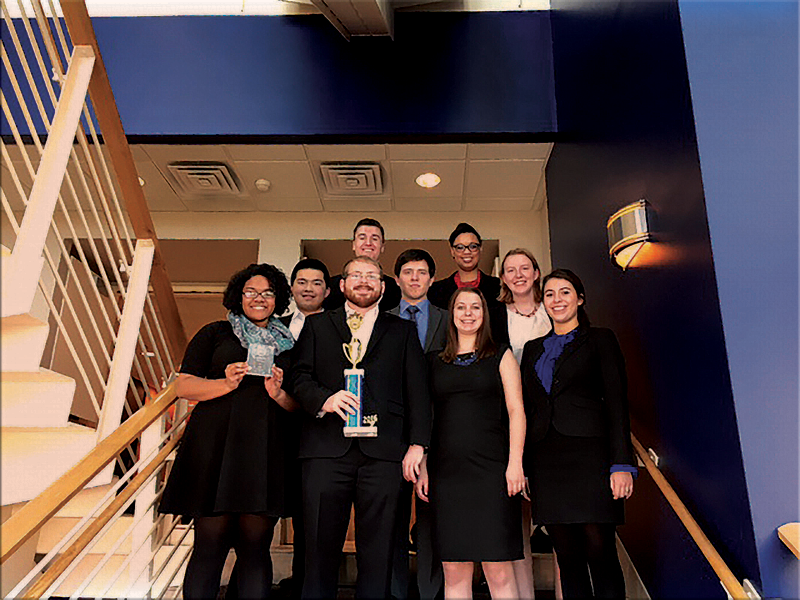 Washburn’s mock trial team, called the Trialin’ Bods, have won their regional tournament and have obtained a spot at the Opening Round Championships tournament this year in St. Paul, Minnesota.

Not only did they secure their spot, they did so with a perfect 8-0 record. In addition to making it into their championships, they also celebrated an individual award. Senior political science major Cleotha Daniels earned an award as an “Outstanding Attorney” with 17 out of 20 ranks.

“[Mock Trial] is a means of collegiate students arguing fictional cases, and we do it through competitive trial simulations against other teams throughout the country,” Daniels said.

“We get one case a year that we as a team argue,” McAfee said. “We argue it from both sides of the case.”

Both said that after graduation in the spring they plan on attending law school, and they feel that being a part of the Trialin’ Bods all four years here at Washburn has helped them immensely with what they plan to do in the future.

Jim Schnoebelen, associate professor of communication studies, is the coach of the Trialin’ Bods. He has been coaching the mock trial team for what will soon be eight years at the end of this spring semester. He said the he enjoys working with the students in mock trial because they are self-motivated and

“because I get to work with the best of the best.”

Not long after the team began celebrating their admittance into the championships, they received some tough news.

The Trialin’ Bods were cut from the university budget. It is a result of the budget cuts coming from the state.

“I know that there is a movement going on right now, especially among alumni, as well as members of the team who won’t be graduating in the spring, to try and keep the program going as a student-run organization,” Schnoebelen said.

He expressed his admiration for those still supporting the program, and said he plans on continuing to advise the group. He plans on staying hopeful for the future of the Trialin’ Bods and feels that through support, the program can continue.

Coming up next for the Trialin’ Bods is a trip to St. Paul, Minnesota, in the weekend leading up to spring break this year (starting March 12), where they will compete against the best in the nation and will attempt to earn a spot at the national championship that will end the mock trial competing season.