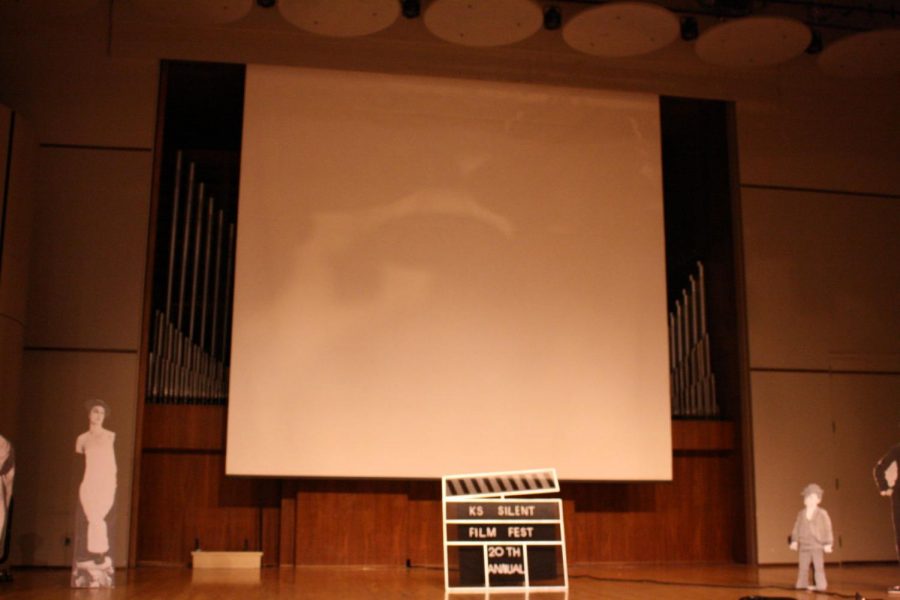 The 20th Kansas Silent Film Festival was held last week. The festival was host to movies like "Battleship Potemkin," "The Thief of Bagdad" and "The Cohens and Kellys"

The Kansas Silent Film Festival had its 20th anniversary this past weekend, showing many different and seminal silent films.

The film festival is held every year as a way to provide people with an opportunity to explore film history and, by association, art history. The festival showed an array of silent films, all accompanied by talented musicians from around the country.

The weekend-long festival started Thursday, Feb. 25 at the Jayhawk Theatre. Three films were shown: “Those Awful Hats,” a D.W. Griffith short exploring the movie-going experience; “The Immigrant,” a famed Charlie Chaplin film in which he portrays his iconic character, “The Tramp,” and “It,” a Clara Bow film that defined the early 1930s in terms of women’s fashion and sexuality.

The festival moved to White Concert Hall at Washburn the following day. The first film shown was the short “Call of the Cuckoo” featuring Laurel & Hardy. Denise Morrison, a film historian from Kansas City, was the Master of Ceremonies for the night.

Before each film Morrison gave a short introduction. The big film of the night was “The Thief of Bagdad,” an influential film in terms of early special effects and theatric scope, and one of Douglas Fairbank’s largest and most expensive productions.

All films were projected on two vintage Eiki projectors. Richard Every served as the projectionist and film technology expert for the film festival.

“I’ve been doing this for the last 17 years. They just keep asking me,” Every said.

Every has been projecting movies since he was 10 years old.

“You start and one thing leads to another. That’s how it is for everyone who has a hobby,” Every said.

When asked if he could pick a favorite movie from the list of the films playing at the festival he said he couldn’t.

The festival continued Feb. 27, starting at 9 a.m. and playing movies until 10 p.m. with a few small breaks in-between.

The morning started with two silent films produced by the Soviet Union in the 1920s. “Chess Fever” is a comedy film about a man obsessed with chess. His obsession causes him to miss his wedding ceremony. His wife finds the world champion Jose Raul Capablanca, the actual world chess champion at the time, who helps them reunite their relationship.

The festival then showed “Battleship Potemkin,” a seminal film directed by Sergei Eisenstein. A real event in Russian history, it gives a fictionalized version of the battleship Potemkin mutiny that happened in 1905. The Odessa Steps sequence is considered to be one of the most famous scenes in all of cinema, and has influenced multiple different art forms.

In the afternoon the festival showed “The Cohens and the Kellys,” a comedy about the antics and feud of two families who are drawn closer together after the marriage of two children from each family.

In the evening the festival showed “Cops,” a Buster Keaton short about a man who accidentally gets involved in a crime and attempts to evade the police.

The festival ended with the film “Beau Geste” starring Robert Colman and directed by Herbert Brennon. The movie concerns two brothers fighting during the war after one of the brothers is suspected of stealing a valuable gem from his adoptive family. It was one of the most popular adventure films of the 1920s.