Softball ready to forget off weekend 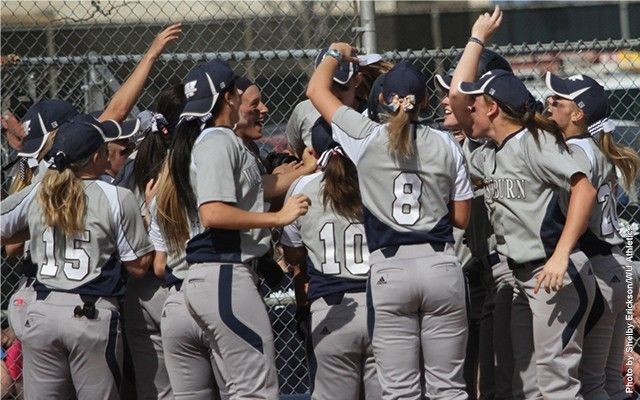 It was just an off day at the office over the weekend for the Washburn women’s softball team who dropped three out of four games. They continued MIAA play after winning five of their last six games in non-conference games entering the weekend. The Ichabods seemed to have hit a few bumps in the road taking on Missouri Southern on Friday along with a pair of games at Pittsburg State the following day on March 26. Washburn would lose game one 0-2 on Friday but steal the second game 7-5. On Saturday they would drop both games, 0-13 and 3-12, to the (28-9) Gorillas.

Facing a hungry Missouri Southern team who has lost five of their last six games, Washburn just could not purchase a run. With two runners on early for the Ichabods in the first inning, the Lions would record three straights outs to end the damage. Again the Bods had a momentum filled inning in the third when junior Megan Stegman and sophomore Cassidy Merriman hit back-to-back singles with one out. They would be left stranded as well. MSSU would break the scoreless game, scoring two unearned runs off an Ichabod throwing error late in the third inning. WU would try for a comeback but ultimately drop the game 0-2 as they were outhit 9-5 and would leave 11 batters on base. Samantha Carson would take the loss pushing her overall record to (6-6) while Ashley Ruder and Sierra Kemp would both have multiple hits for the Ichabods.

Game two against the Lions would feature more scoring and a victory for Washburn as they would find their groove early. After reaching on a bunt single and advancing to second on a fielders choice, Megan Stegman would race home on a Lions fielding error putting the Bods up 1-0. Another run would score in the second inning after back-to-back singles by Haylee Marsteller and Lexie Myers. Ashley Ruder’s second hit of the game would knock in Marsteller as Stegman’s sac fly would score Myers. With the 3-0 lead Missouri Southern would score five straight runs in the bottom of the sixth almost giving up the game as they lost the lead. However a strong seventh inning by the Ichabods would help them prevail 7-5. Stegman continued her strong play and lead the inning off with a single, scoring on Cassidy Merriman’s double. With Merriman on second, Sierra Kemp would take first base on bit-by-pitch and a wild pitch later advances the runners with one out to allow Marina Quimby and Lacie Myers to both connect on RBI singles pushing Washburn back up 6-5. Quimby would later score on a groundout making the score 7-5.

Saturday Washburn faced a tough Pittsburg State team in another MIAA doubleheader. Washburn’s last win over the Gorillas was a 5-3 win on April 5, 2014 . They would fall the first game in five innings allowing 13 runs off of four errors , nine being unearned. Ashley Ruder’s double would be the only hit of the game for the Bods as the offense seemed to be stagnant. Pitcher Samantha Carson took the loss allowing three earned runs in the first as Ashley Wills finished the final three innings giving up one earned run as the Ichabods fell 0-13. Senior Marina Quimby would pitch in game two that would feature two big innings for Pittsburg State as the Ichabods faught back from a 4-0 deficit in the fourth inning scoring three times. Marina Quimby’s RBI single would push in Taylor Zimmerman and Sierra Kemp. Quimby would then score on an bobbled ball error by the Gorillas later in the inning with Washburn down 3-4. In a tight game heading into the fifth, Pitt. State would take control scoring eight runs in two straight innings downing the Ichabods to a record of (14-16 overall, 4-8 MIAA). WU now has lost 5 straights games to PSU. Haylee Marsteller and Taylor Zimmerman would have two hits a piece.

The Ichabods continue MIAA action at home Friday April 1, 2016 against University of Central Missouri. Followed by a two game series at home against Southwest Baptist University on Saturday.