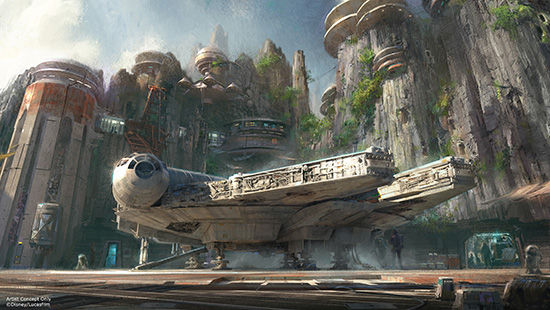 Disney parks will now expand their attractions from original, beloved Disney characters, such as Donald Duck and Mickey Mouse, to popular, otherworldly characters. After the purchase of Lucasfilm, Disney will continue its enormous profits from the Star Wars billion-dollar franchise.

Disney is currently in the works of creating a Star Wars themed area in their California and Florida parks. On the “Disneyland 60” special, which aired Feb. 23, Ford showcased a few of Disney’s attraction concepts and ideas that will expand Disney’s parks by 14 acres.

Although the new Star Wars attraction won’t be seen by the public for a few years, Ford previewed two exciting rides for viewers. The first ride mentioned will allow theme-park-goers to hop aboard and take full control of the Millennium Falcon. Guests will have the unique opportunity to navigate the galaxy’s fastest ship through space.

Ride two will consist of enticing fights between the First Order and the Resistance, allowing guests to have an up-close view of the action. Construction of the parks is set to begin this year.

“I think [this attraction] will get really popular because Star Wars is so popular,” said Tiana Chiselom, sophomore psychology major. “It’s just another attraction. It’ll be super packed and super busy. It probably will be super expensive too.”

Specialized, themed locations around the future park will also allow guests to wind down while enjoying a drink of blue Bantha milk and talking to wandering droids and aliens.

Jason Kelsey, junior psychology major, said he’s a fan of the Star Wars films, but doesn’t have any plans on visiting the new Star Wars attraction.

“I’ve never been to a Disney park,” Kelsey said. “I think [the new attraction] will attract younger people.”

The Disney special also showed numerous concept art pieces that gave viewers vivid images of the potential Star Wars attractions. The images displayed first-hand look at what appears to be an arena, a marketplace, an eating area and a cantina.