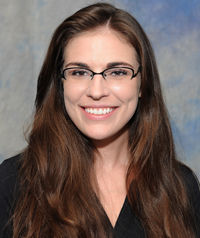 The Achieving Excellence Award recognizes faculty, staff and community leaders who go beyond their normal responsibilities in working with students. Student Life presents the award each month during the academic year. Members of the Washburn community, such as students, nominate recipients of the award.

“I’m so lucky to be at this university and work with such great students and such wonderful colleagues,” Gibson said.

According to Vicki Baer, administrative specialist of Student Life, Gibson was nominated for inspiring students to study psychology, as well as for advising the Washburn chapter of Psi Chi, an international honor society for the field of psychology, and helping the organization create events that benefited psychology majors. She has also hosted panels on graduate school that have helped her students prepare to continue their education.

“Someone thought she was going above and beyond for her students,” said Joel Bluml, associate vice president for Student Life. “Someone saw something special in Dr. Gibson that made them want to say thank you.”

Gibson is honored by the nomination and sees Achieving Excellence as an award of mentorship.

“I strive to be a good mentor,” Gibson said. “I had so many amazing mentors throughout my life.”

The Student Life team, led by Vice President Denise Ottinger, surprised her with the award during one of her lectures. The presentation included giving Gibson a certificate and taking pictures with her students and colleagues from the department of psychology.

When a student nominates a professor, Student Life works with the nominee’s department to find the best time to present the award in class.

Bluml sees the award as a way for students to formally thank the teachers and staff members who help them in their education.

“Often times in the grind of a semester, you don’t necessarily know that your efforts are being appreciated,” said Bluml. “So it’s neat to be able to thank a faculty member or member of the community in real time.”

Student Life encourages students to pick up an application from their office in Morgan Hall 240.

“We would like to encourage more nominations,” said Bluml. “I think we can all think of someone we encounter daily who could be a nominee”

Each winner of the Achieving Excellence Award in an academic year is eligible for the Muriel D. Clarke Award, named after a former student and longtime supporter of student life. A committee of eight Student Life members decides the winner of the Muriel D. Clarke award. The award is then presented to the recipient at Washburn’s annual Employee Recognition ceremony in April.