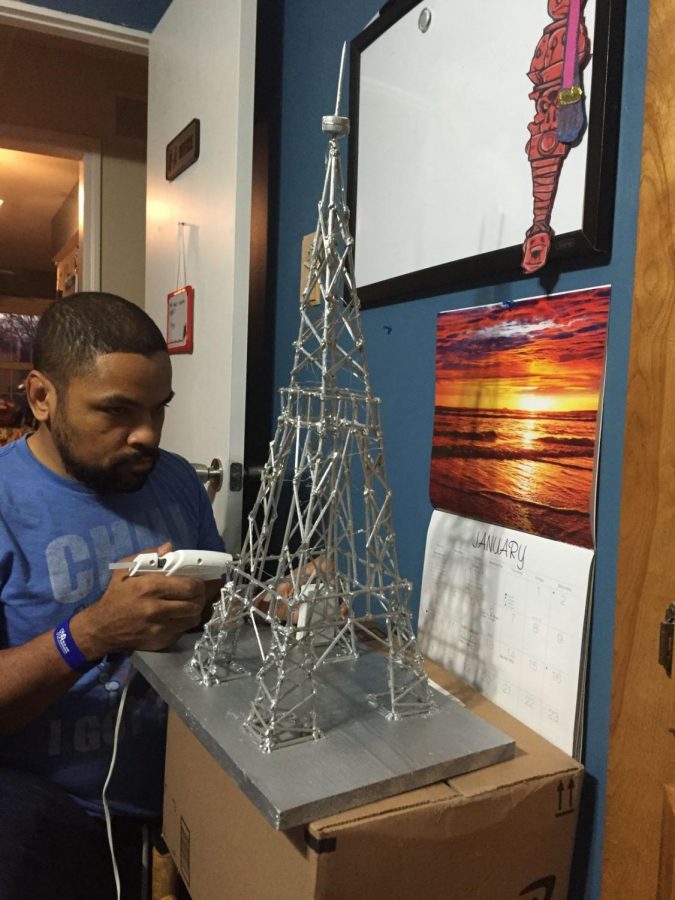 Scott prepares one of his pieces for the Washburn Student Art Exhibit.

Aldrick Scott is a Washburn student, veteran, father and now the February WASA Artist of the Month.

Now at age 41, Scott served in the Marines for 20 years and is now pursuing his true dream of becoming an artist. He is a sophomore, majoring in graphic design. He dabbles in many forms of art including drawing, animation, mixed media, graffiti and ceramics.

“Ever since I was able to hold a crayon in my hand I was drawing,” Scott said. “I’ve been drawing my whole life, even in the military.”

When first starting to think about a career in art, Stott was heavily inspired by cartoons.

“I’ve always had a passion for ’80s cartoons,” he said. “They always had a life lesson at the end of the cartoon. I want to bring something like that back where it teaches something: values, honor and integrity.”

Scott hopes that his art will inspire others. In many of his works he pays tribute to veterans or current social issues in the world today.

“I am entrapped in the moment,” Scott said about creating art. “Whenever I have an idea or thought, I’m always doodling. Whenever I’m in class, taking notes, I’m drawing a picture with it. I have a whole notebook full of doodles with captions.”

In the future, Scott hopes to graduate and get a job as a graphic designer. In the long-term, however, his ultimate dream is to produce and illustrate his own cartoon.

Scott is also involved in the mixed martial arts and jiu jitsu, and during his military career he taught army combaters. Now, after 20 years, he is finally fulfilling his dream of becoming an artist.

“This is really what I want to do in life; this is who I want to be,” Scott said. “It’s never too late to follow your dreams. I’m 41 and pursuing my dreams, still. I’m enjoying every minute of being in college, and being able to do this is just amazing. Everyone here [at Washburn] has been kind to me and believed in me.”

The Mulvane Art Museum is currently displaying much of his work in the student art show.

“I believe that I’m honest in what I do. I’m motivated and I like to motivate people around me,” Scott said.