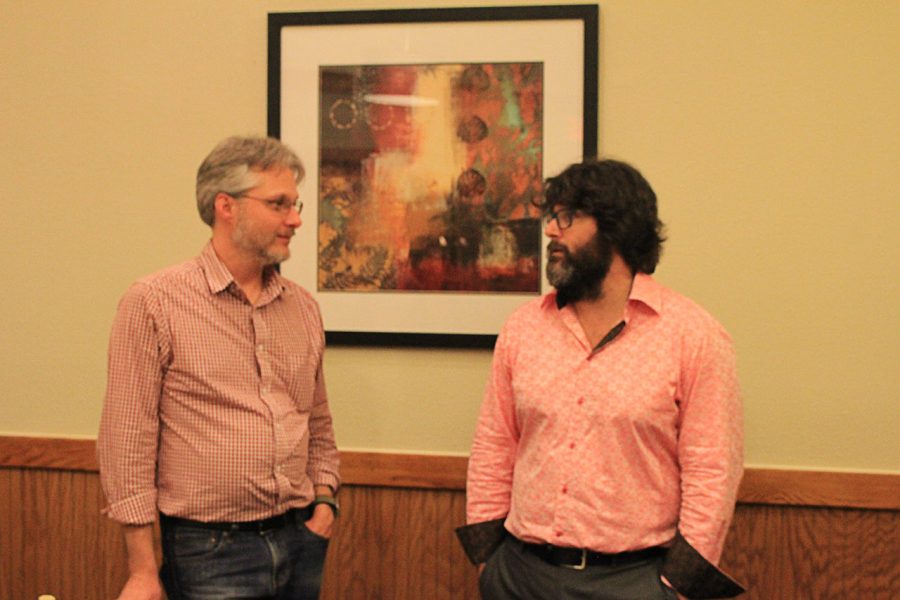 About 30 Topekans gathered March 9 to listen to a speaker talk about the search for life on Mars and how challenges of engineering are often made more difficult by the realities of real life.

On the second Tuesday of each month, Brian Thomas, a professor in the physics and astronomy department at Washburn University, hosts the Topeka Science Cafe at the Perkins Family Restaurant at S.W. 17th Street and Wanamaker Road. Each month a speaker is brought in to talk about a wide range of subjects involving science.

“There’s not a lot of opportunity for the general public to interact with scientists,” Thomas said.

Thomas said that people have told him they love attending the Science Cafe because they don’t normally get to talk to people about these topics very often. He said he can talk to scientists all the time if he wants to, but to have a place where anybody can walk in and hear about an interesting topic from someone who really knows it well is important.

“I think people need to have some understanding of science,” Thomas said. “This is not a class. There is no test. There is no homework. There is no expectation. Just come and hang out and learn something.”

This month’s speaker was Craig Marshall, a professor from the University of Kansas’ department of geology. He talked about his work helping with the search for life on Mars. His research is in Raman spectroscopy.

Spectroscopy is the study of the interaction between matter and the electromagnetic spectrum – the light spectrum. Raman spectroscopy involves using a laser to cause atoms to vibrate at unique frequencies. These can then be used to identify chemicals – organic chemicals in particular – that may have once been part of microbial life. Placing this spectrometer on Mars is the next step in the search for life on the Red Planet.

In 2004, NASA’s Mars rover Opportunity discovered evidence of past liquid water. Other rovers, landers and orbiters have since confirmed these findings on other areas around the planet.

Where there is water, there could be life. NASA’s Curiosity rover and other spacecraft have now started looking for areas that had the conditions for life in the past, but not life itself.

In 2020, the European Space Agency and NASA will both be placing new rovers on Mars. Both will have a Raman spectrometer to search for chemical signatures of life.

The challenge has been miniaturizing the technology. A Raman spectrometer is typically the size of a large refrigerator or greater. An instrument on a rover being sent to Mars needs to be the size of a small toaster oven. That is a problem that engineers have been working on for eight years.

“But the story actually gets a bit more complicated,” Marshall said.

Marshall said sometimes engineers work in backrooms and don’t collaborate with geologists. He said when the miniaturization process began, they had to choose the laser type that would best detect organic chemicals in the minerals on Mars. Different laser types perform differently. They ultimately chose a green laser.

Marshall said ESA and NASA made their decisions based on analyses using pure minerals. The problem, he said, is a lot of the material this laser will encounter on Mars won’t be pure.

“A rather funny decision to make,” Marshall said.

Marshall and other researchers at KU found out through field research that using this laser type on Mars won’t result in what scientists want to look for because the environment isn’t pure. Recent data from Curiosity showed that the element Chromium is in large abundance in some of the minerals that scientists want to look at for organic compounds.

“It turns out Chromium is a real pain in the backside if you want to collect Raman spectra … using a green laser,” Marshall said.

He went on to explain that red lasers would work better for “real world” Mars, but the optics for a red laser versus green are completely different and would result in starting over in the miniaturization process – something impossible to do before the 2020 rover deadlines.

“They will probably run into a lot of problems,” Marshall said.

He said engineers at NASA and ESA are coming to terms with the mistake, but are stuck with the current laser. There is now research being done to ensure the data gathered by the spectrometer is as useful as possible, but finding the chemical signs of life isn’t likely in the early 2020s.

Marshall said he and other researchers at KU will continue working on this problem, but since their work in particular isn’t being funded by NASA or the National Science Foundation at the moment, the work will be slow and steady.

The next Science Cafe will be April 12. The speaker will be Keith Miller, a paleontologist from Kansas State University. He will talk about climate change.