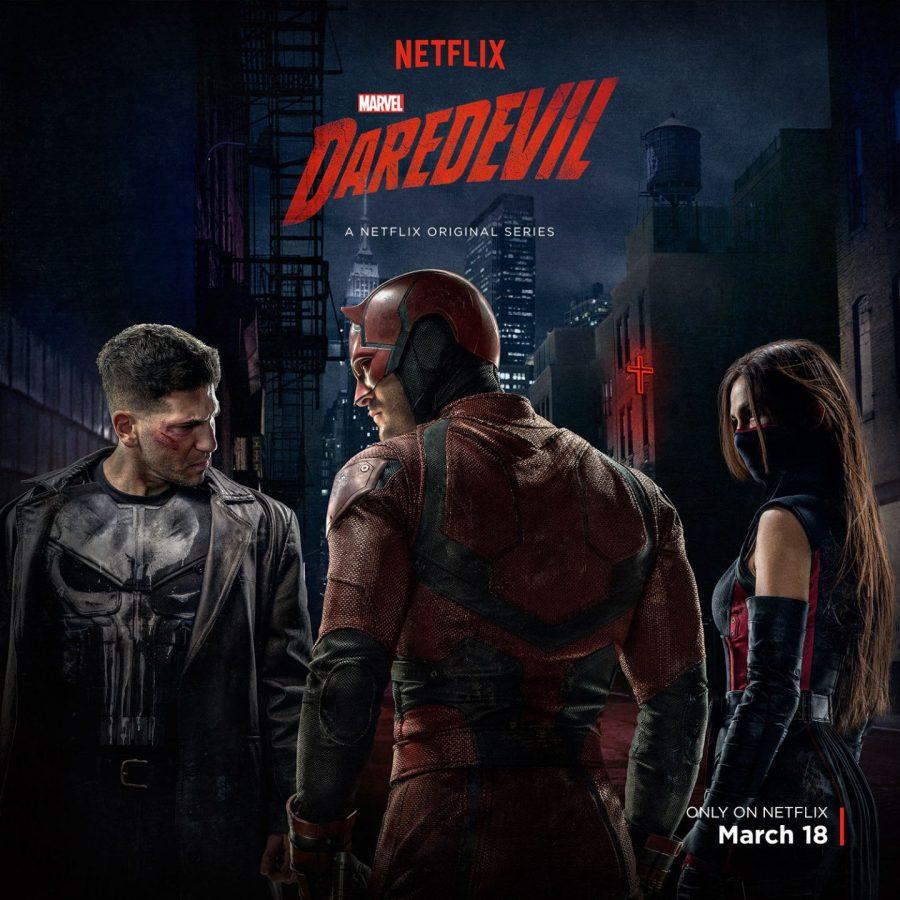 (Left to right) The Punisher, Daredevil and Elektra cooking up disaster in Hell's Kitchen. This is the first time all three characters have appeared in the same live action adaptation.

The road to Hell’s Kitchen is paved with good intentions.

In season two of Netflix’s original adaptation series “Daredevil,” showrunners pull us back into Matt Murdock’s electrifying storyline and prove that the series is still worth every ounce of hype.

Where last season left off, Murdock has to reconcile with the fact that taking down one crime boss doesn’t necessarily defeat all of a city’s evil. With Fisk in prison, there is now a power vacuum in New York’s criminal underworld, and Daredevil is scrambling to contain the chaos.

Despite a nearly flawless season one performance, Charlie Cox as Matt Murdock/Daredevil proves he still has plenty to offer in terms of acting chops and commitment to the physicality of the role. The action sequences are top tier by a cinematic standard, and with good reason. The fight choreographers behind other Marvel masterpieces such as “Captain America: The Winter Soldier” and “Deadpool” have been working on “Daredevil” since season one.

The action is filmed in a series of long, excruciating shots with minimal stunt doubles, and features violence worthy of a Tarantino film, although it never reaches gratuitous levels. What’s more, there are subtle callbacks to scars from specific season one battle wounds. The show excels in ripple effect continuity and storyline payoffs.

The demanding physical toll of the role aside, Cox truly shines through by way of Murdock’s moral journey this season. Where season one was preoccupied with a high-action cat-and-mouse plot and character introductions, this season is more of a character study, delving into Murdock’s moral code and challenging it. And who better to challenge him than The Punisher?

Frank Castle (Jon Bernthal) is a main antagonist this season, taking on the moniker The Punisher. While he’s not a cut and dry villain, Castle’s methodology causes him to repeatedly clash with Murdock’s more rigid definitions of right and wrong. Castle sees killing criminals as a necessary evil and asks Murdock to question whether or not it’s irresponsible to let criminals live when they could pose future threats.

My favorite tagline of the season came from Castle: “You’re one bad day away from being me.” And he’s not wrong. Not three episodes in, Murdock is already reaching a breaking point physically and mentally while dealing with both the new landscape of Hell’s Kitchen and his strained personal life. Something has to change.

Another aspect of the show that fans will enjoy was Elektra Natchios (Elodie Yung). This was a the character fans were arguably the most apprehensive about, given her terrible past portrayals and lack of screen time in the season trailers. A pleasant surprise, then, that she turned out to be one of the most dynamic, compelling characters second only to Castle. An important figure from Murdock’s past, Natchios represents the life he could have had as an assassin if he’d stayed with their mentor and all of the skewed priorities and moral code that come with the lifestyle.

To say that this “Daredevil” is a delight would be a gross understatement. This show will exhaust you in the best ways as “Daredevil” continues to set the bar ever higher for the superhero genre.