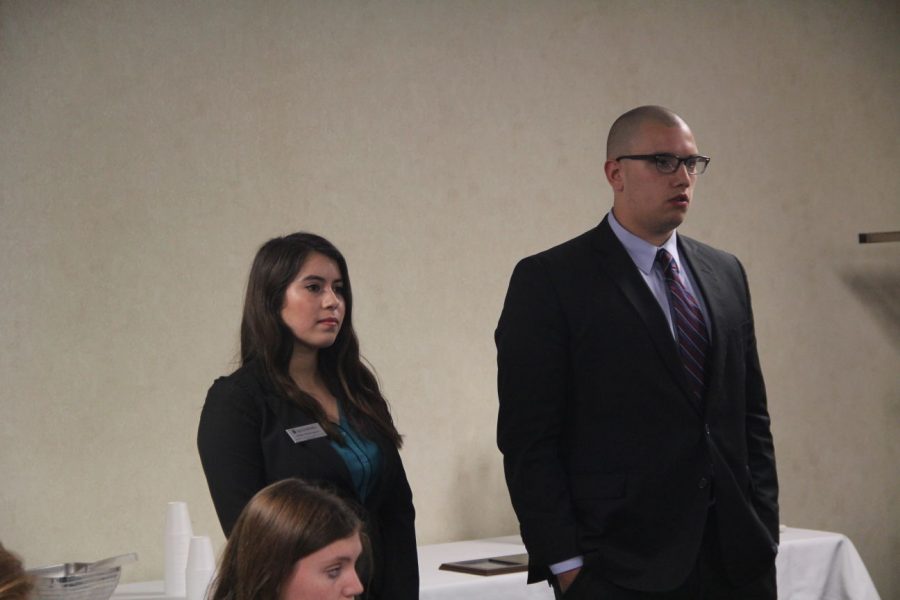 Washburn Student Government Association had its inauguration to swear in its new president and vice president for the upcoming year.

Washburn Student Government Association swore in its new president, vice president and newly elected senators April 20 to start their first meeting before normal business could be brought to the table.

The meeting was a little rugged at first, but as the new senators got used to parliamentary procedure, the process sped up.

“I’m most excited for the new administration to learn all the parliamentary procedures because I had trouble learning it coming in to open senate seat last semester,” said Chris Beier newly elected WSGA senator. “I hope to see WSGA pass some meaningful bills to make changes around campus in a positive manner.”

The last positions to be elected by the senate were for internal affairs. Traevor McPherson, Alex Lasher, and Claire Pickert were elected.

After the body elected their positions, WSGA continued to the rest of the agenda.

“I’m very excited to take on my own project of reforming the constitution and the bylaws: making them more clear and concise; making them more accessible to the student body, because, as your government, it’s important for us to be accessible and for our policy to be easily understood, especially when you want to come to us for whatever it may be; helping to understand the process is really important,” said Traevor McPherson, newly elected WSGA senator.

Student government also voted on a bill to give Bod Squad $5,000 to make a “traditions book” for the organization. The project was put together as a capstone by Sara Edelman.

The book will catalogue different traditions Washburn has and if a student completes a certain number of traditions they become a “traditions keeper.” They would then get a medal they could wear at graduation.

The books would cost students $7.50 a person and Bod Squad would change its membership fee from $10 to $15 for students to join. The bill was passed.

The senate regularly meets at 6 p.m. on Wednesdays during the semester.