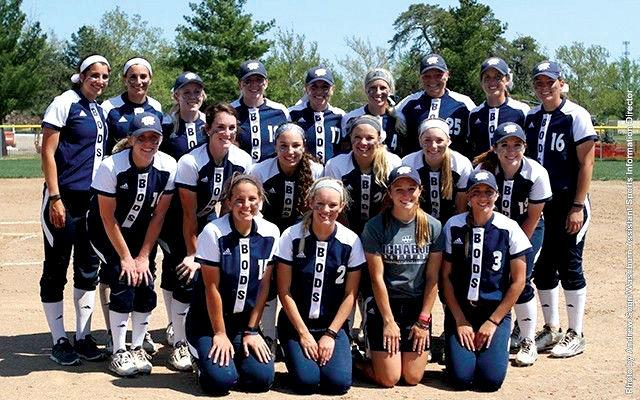 The Washburn softball team lines up to participate in a photo after the game against Missouri Western. The team fell in multiple games over two days.

The Washburn Ichabod softball team wrapped up their regular season over the weekend hosting the top two teams in the region.

The Bods would dual with Missouri Western on Friday and Northwest Missouri on Saturday at the Washburn Softball Complex.

They would ultimately fall short of making the MIAA tournament after falling in four tough games in two days.

The 15th ranked Missouri Western team led the conference with a 19-3 league mark and 35-11 overall and Northwest Missouri entered with a 17-5 MIAA mark and 34-10 overall, which is second.

The chance of making the MIAA tournament for the second consecutive year and winning one last time for the seniors was all they could think about. The fact that they were facing the top two teams in the region was no problem, but the quality at bats was not there with runners in scoring position.

Beginning on Friday in an inIn the bottom of the seventh the Ichabods were in for a rally as Lacie Myers led the inning off with a solo home run followed by a walk by Haylee Marsteller with one out to cut the deficit 4-1. A hard lined single by Ashley Ruder kept things going as she advanced Marsteller to third and herself to second.

The rally would cut short on two straight strikeouts ending the game 4-1 in Missouri Westerns favor. Seniors Quimby and Marsteller both finished with two hits a piece.

The Bods would out hit the Griffons in game one (8-7).

The Griffons would score seven runs before WU could have a chance at answering back. Down 7-0 in the bottom of the fifth, the Bods would see senior Taylor Zimmerman blast a 3-run homer cutting into the Griffon lead 7-3 for another late game rally.

Missouri Western would score four more runs and take the game 11-4. Zimmerman finished with three hits while Ashley Ruder had two of the 11 total Ichabod hits.

The team would see their season come to end earlier then they expected after being swept by 25th ranked Northwest Missouri on Saturday.

Pitcher Samantha Carson seemed more comfortable in the circle and defense played well. She would not allow the first Bearcat hit until the second inning with the score remaining 0-0.

Unimaginably with two outs and three hits later the Bearcats gained the lead, 3-0. Washburn fought back the very same inning as freshman Ashley Ruder hit a one out single before Marina Quimby hit for a double advancing Ruder to third with two outs. With the tying run on home plate a strikeout would end the inning.

With runners on first and second, Merriman would groundout advancing runners to second and third for the third time in the game. Zimmerman would continue the rally attempt and knock in Megan Stegman and Quimby, cutting into the Bearcat lead again 8-4. That would come to be the final score and push Washburn further away from an MIAA tournament birth.

Kemp, Ruder, Quimby and Zimmerman all finished with two hits each. The final game of the season came to an end in six innings with the Northwest Missouri taking it 10-0.

“I was pretty excited, I thought we were going to come fired up,” says Coach Becerra on the last games emotional atmosphere. “I thought we did, I think we just kind of lost energy at the end.”

She also explained how this was her first graduating class so this season was special to her.