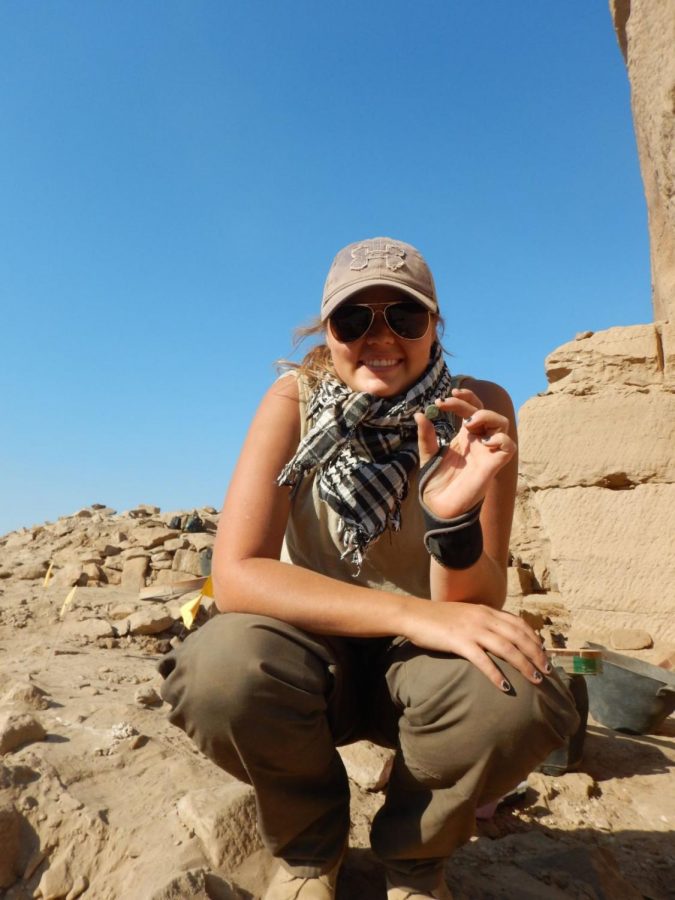 Shelby Beltz, sophomore, anthropology major, showcases her a piece of jade she found during her trip to Belize.

Anthropology major Shelby Beltz has traveled to Egypt and Belize to partake in excavations and experience once-in-a-lifetime opportunities before her current sophomore year at Washburn.

Originally from Rose Hill, Beltz knew she wanted to spend her days digging in the dirt since her sixth-grade mummification project.

“I was just hooked right after that project,” Beltz said. “My parents always told me that when I was little, I was always the [kid] that would find dirt anywhere and go play in it. I feel like this has been destined for me since day one.”

“I’ve always loved bones,” Beltz said. “From day one, [Sundal] had bones out and I thought, yes, this is what I want.”

Although Beltz may be taking her first forensic anthropology course, she’s had numerous hours of field work experiences.

Beltz first began her field work adventures during the summer of 2014. Beltz had the opportunity to travel to a field school in Belize. The trip, which happened through the University of Texas at Tyler, was also supported by the National Geographic Society and National Science Foundation.

Beltz said her father saw the opportunity online and pushed for Beltz to be involved in the trip. Beltz spent two weeks learning about the Mayan Indian culture through her days of excavation.

Beltz said she, along with other students at the field school, excavated 1,000-year-old artifacts in the jungles of Belize that opened Beltz’s eyes to the possibilities of working in Central America in the future.

“My dream job would be working with archaeologists in Belize,” Beltz said. “I want to live there, I want to work there, but I know it’s probably not going to happen because it’s not a very safe area to work in. Guatemala and Honduras are more developed areas. There’s no funding in Belize; there are so many dig sites that are just sitting there covered up.”

After experiencing a taste of traveling and excavation methods, Beltz wanted more and soon was on her way to Egypt during the spring 2015 semester. Beltz’s Egypt opportunity first began in 2012, when she was presented the idea of going to Egypt on her trip to an archeology convention Minnesota. While she was there, Beltz met John Ward and Maria Nilsson. Nilsson invited Beltz to travel to Egypt in 2015 and participate in more field work.

While in Egypt, Beltz excavated on a quarry site and again fell in love with the exciting finds and discoveries that lied underneath the sand and rocks.

While on her trip, Beltz and the other participants and archeologists discovered cenotaphs, or false burials, that Egyptian workers created in the 18th dynasty.  Nevertheless, Beltz encountered much gender discrimination while she was working in Egypt.

“I personally didn’t think I had the best experience in Egypt since I was a woman, but I’ve been craving to go back,” said Beltz. “When I came home I first said I was never going back. The people there kind of look at you as weaker and don’t expect you to work as much. I knew I could do everything, but I was treated like a weak woman. I definitely had some culture shock.”

Beltz says she is greatly anticipating the day that she gets to graduate from school and go back to digging in the dirt.

“I highly encourage people to try getting experience in their [major],” said Beltz. “I just want to start my life. Every time I find out what I’m going to be doing in the future I want to be done so I can go places.”

Beltz will returning to Belize this summer through the same University of Texas at Tyler program to participate in a bioarcheology course, which will include studying bones and excavation.