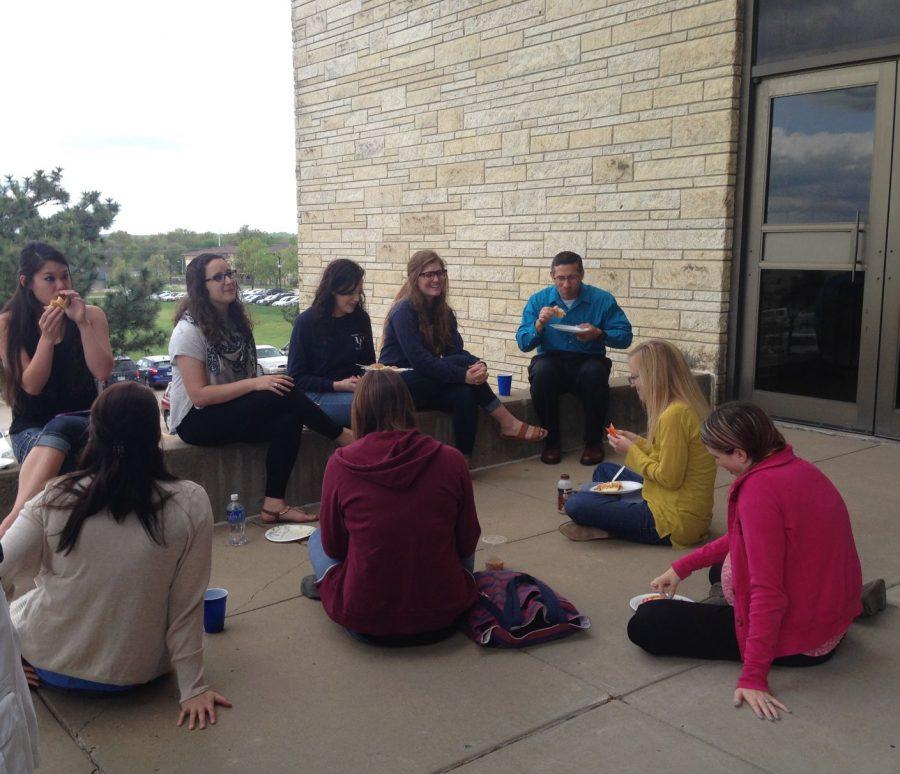 Psychology students and faculty munch on homemade food provided by Psi Chi and faculty members during the bi-annual psychology department picnic. The picnic took place on April 20 outside of Henderson and allowed students to mingle with fellow classmates and feel a part of the program.

Sunshine, sandwiches and students made for a fun afternoon during the psychology department picnic, which took place from 11 a.m. to 1 p.m. April 20 on the southeast patio outside of Henderson.

“People tend to stick to themselves during the school year, so even though we’re in the same major, we don’t really get a chance to socialize out of class,” said psychology department honor society Psi Chi secretary, Ellen Glasgow. “This is an opportunity to get all the psychology majors together to hang out and take a break.”

Psychology students, Psi Chi members and faculty all mingled while munching on homemade fruit salad and brownies, which were provided by Psi Chi and faculty members.

“I like the picnic because everyone is really friendly,” Rogers said.

Along with socializing and eating, the picnic also included the announcement of scholarship winners by department chair Cynthia Turk. Attendance peaked just before noon as students awaited for Turk to arrive and announce scholarship winners.

“Even though we are here to find out who won the scholarship, that’s not at all what any of the conversations going on are about,” Rogers said. “I could sit down anywhere and people would treat me like they’ve known me forever. The [food] is good and the conversation is great.”

Psi Chi hosted its bi-annual event that provided psychology majors with a chance to get to know their fellow classmates and to be presented with one of the many scholarships offered.

“I think [the picnic] is really great because it gives everyone a chance to be involved and meet fellow psych majors, and that’s always nice, especially if you’re a freshman or sophomore and don’t know many people yet,” said Andrea Stitt, sophomore psychology major.