Play ‘This Is Our Youth’ brings 1980s to Washburn 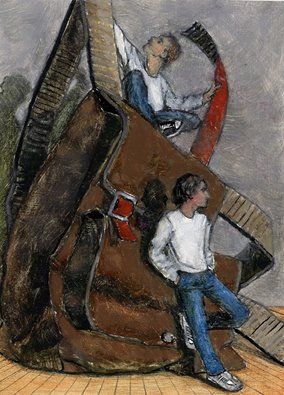 Material privilege does not satisfy the cast of “Youth” set in 1982. Originally produced in 1996, the play did not hit Broadway until 2014.

“This Is Our Youth” is a post-modern play. Such is the ambivalent spirit of Washburn’s latest production. Set in the early 1980s, the show shows around two days of thrills and contradictions of the lives of three young people.

The play’s action is all seen within Dennis Ziegler’s apartment on the Upper West Side of Manhattan, New York. A believable studio apartment is created on stage that is at once cramped, gross and oddly captivating – like a small personality-filled world.

Warren Straub (CJ Williams-Herrera) is the play’s protagonist and a great representation of the awkward time between high school and “real” adulthood.

The play tracks the consequences, or lack thereof, of him stealing money from his wealthy father with whom he has a less-than-healthy relationship.

In the sequence of events that follows we learn about Warren, his drug dealing friend Dennis (Alex Laughlin) and Warren’s love interest Jessica Goldman (Darria Dennison).

The play’s first act was well paced and had a good number of laughs to help sustain this dialogue-heavy play. The dynamic between Warren, a lanky embodiment of being in over one’s head, and Dennis, who has become a grungy scar-face wannabe, made for an entertaining duo and one that raised interesting questions about privilege.

Act one also used music quite well to bring comedic and touching moments out between the characters. However, during one sequence, the actors had to fight pretty hard to be heard over the music. Still, the songs were a nice fit for the time and for the mood being set up.

Another piece of technical work that should be credited is the costumes. Jessica’s costume in the first act was especially well done. It was a real visual transformation that at once established the time but also enhanced the character.

Her costume, busy and trendy, helped explain her dealings with men. She verbally keeps Warren at bay being understandably defensive, but clearly she is concerned for how people see her.

Act two incorporated multiple monologues by Dennis and Warren. Though the monologues were performed well, the writing was done with a tradeoff. What the audience gains in insight into the characters, it loses in the feeling that the play was a believable interaction between the two.

The characters hold up a mirror to audiences 30-plus years removed from themselves and effectively ask questions of youth: Who are you? What do you want? Are you a good person?

“This Is Our Youth” will be showing in the Neese Gray Theatre at 7:30 p.m. April 22 and 23 and at 2 p.m. April 24. Washburn students, faculty and staff get tickets free of charge with their IDs.