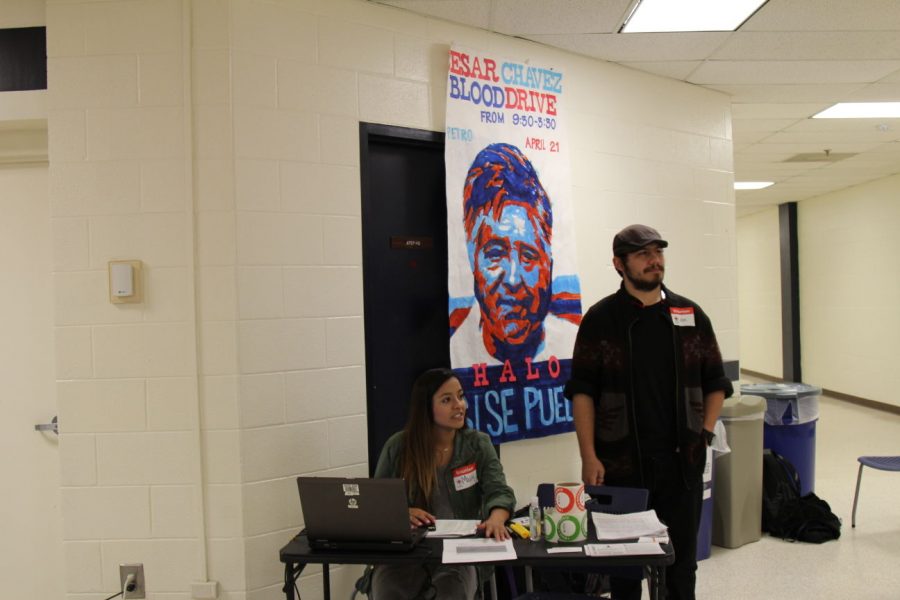 The ground floor of Washburn’s Petro Allied Health Center was buzzing with activity as employees of the American Red Cross partnered with members of HALO to operate the annual Cesar Chavez Blood Drive Challenge. The blood drive lasted from 9:30 a.m. through 3:30 p.m. April 21.

HALO, the Hispanic American Leadership Organization, is designed to encourage students to develop their education by becoming successful societal leaders who promote awareness of Hispanic cultures.

The blood drive has been an annual tradition at Washburn since 2011 and is always set in April to align with Chavez’s birthday on March 31. The intent of the blood drive is to honor Cesar Chavez, an influential Hispanic American.

Liandro Rodriguez, junior, is the event coordinator and treasurer for HALO. Rodriguez started planning the event in November 2015 and managed to sign up 53 people in advance to the April 21 event.

“The goal of this event is to spread awareness that certain ethnic groups do not donate as often as others,” Rodriguez said. “And to let people know that if more of these people donated, there’d be help for people suffering from specific blood diseases.”

Universities and junior colleges throughout the U.S. participate in the Cesar Chavez Blood Drive Challenge. This year was the first blood drive in which HALO partnered with the American Red Cross instead of the Community Blood Center.

“I believe partnering with the Red Cross has brought more professionalism and recognition to the blood drive, which helps fulfill our goal of getting as much blood as possible,” said Bianca Garcia, senior biology major and HALO member since 2010.

According to the American Red Cross’s website, the blood drive challenge helps college students seek out an opportunity to promote health education, health and science careers, civic engagement and help save lives.

One of the many students who volunteered to donate was Rachel Hoover, junior athletic training major. Hoover said she has donated blood several times in the past and believes it’s an important activity.

“Being in the medical field, especially, I believe it’s important to give back to the society that’s given so much to us,” Hoover said.

Maddy Gallegos, sophomore and HALO historian, said she was pleasantly surprised by the amount of people asking what the blood drive was for.

“So many people have expressed interest in our cause, which I believe has brought a great deal of attention to not only Cesar Chavez, but the HALO organization as well,” Gallegos said.