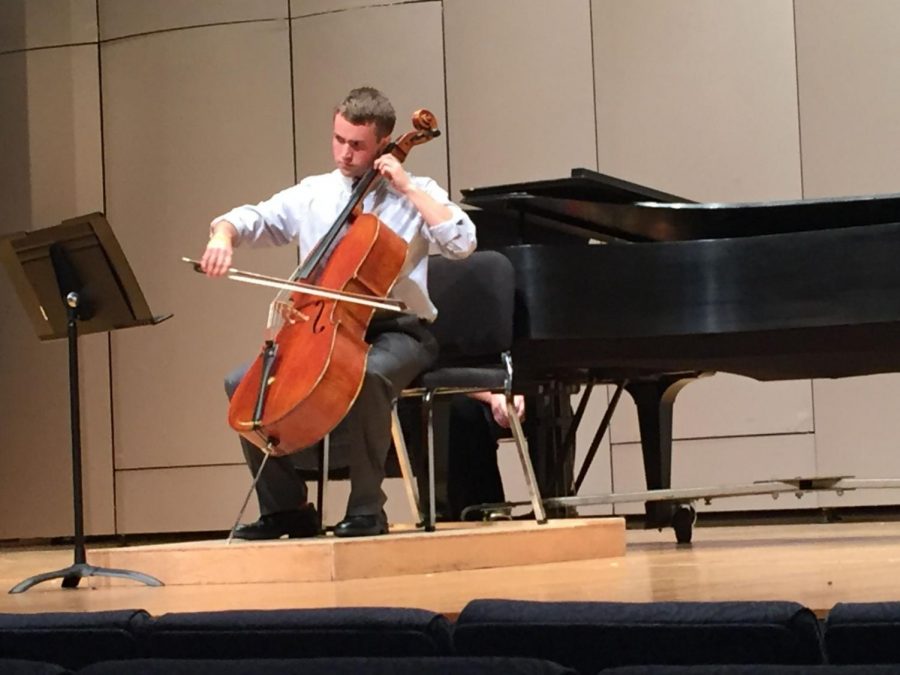 Lytle, who is graduating this year, performed five songs on his cello throughout the evening. Some were accompanied and others were solo performances.

The first song Lytle performed was the longest piece: The Sonata in E minor by Brahms. The piece was so long that it required an intermission before the next four songs.

“After the first half, [the concert] got easier,” Lytle said.

The piece was in three movements. The first movement exhibited fluid, deep notes with a few snippets of acceleration. The second movement was much more lively with a few smooth parts and the third movement was an intense, deep finale.

“That first piece was a really large work, and it was a big accomplishment for me to play that whole thing,” Lytle said.

Another piece that Lytle performed that night was “Nocturne” by Tchaikovsky and arranged by the University of Kansas professor Edward Laut. Lytle was accompanied by a few members of the Washburn Cello Ensemble. Lytle kept control of the piece’s rich melody while his accompanists plucked at their instruments, creating a harp-like effect in the background.

The final piece of the senior recital was performed by 13 cello students that Lytle teaches privately. The chorus of cellists played the traditional song “Danny Boy” with the arrangement put together by Lytle’s music teacher and Washburn professor, Erin Renyer.

“I’m not a huge performer,” Lytle admitted. “So I was excited to get to play a concert all by myself.”

Lytle’s main passion is teaching music and will continue to do so.

“You learn a lot about the instrument, just because every student has different problems,” Lytle said about his teaching experience. “You might have to think about the instrument differently than you normally do…. Just seeing it through their eyes and trying to work out their problems makes you, in the end, a better player.”

After graduation, Lytle said he will begin work as a student music teacher at Olathe South High school. He also will look for jobs in the months to come and probably start off as a substitute teacher.