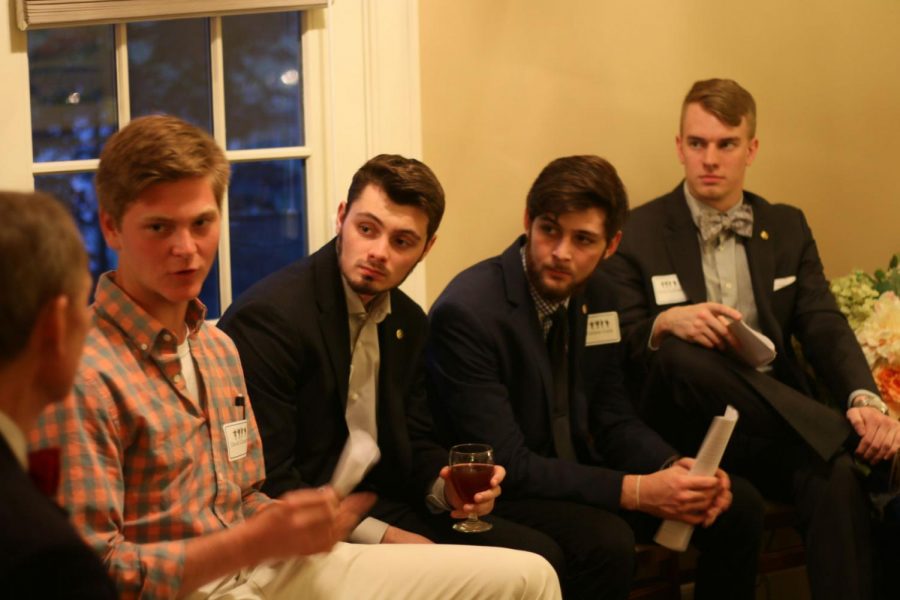 Students from one of three groups sit in a side room of the Farley household discussing and challenging each other on certain topics.

President Jerry Farley and his wife Susan hosted their annual Roundtable Dinner and Discussion at their house April 14. About 25 students were in attendance, all from varying grades, areas of study and backgrounds. There was a guest speaker present at the event, Leslie Reynard, who led the night’s discussion.

Reynard is in her 10th year of teaching communications at Washburn University, but in the past has worked many different jobs in the communications and legal fields. She received her bachelor’s in journalism from the University of Kansas, as well as a master’s in creative writing and a doctor of philosophy in communications. Her focus within communications was politics. This being known, the topic of discussion for the night was civility and civil discourse.

“Civility doesn’t mean politeness or political correctness. It is the ability to engage in open and vigorous discussion of topics that are important to a democracy,” Reynard said.

The night’s discussion began with approximately 25 students gathered around Reynard, President Farley and Mrs. Farley. Then all students were separated into three different groups, led by either Reynard, President Farley, or Mrs. Farley where, while enjoying dinner, they discussed openly and individually what civility meant to them. After dinner and individual discussion, the group came back together to express their final thoughts and wrap up the evening’s discussion.

Throughout the night, many subtopics of civility were discussed, specifically civility and freedom of speech in social media as well as the civility, or lack thereof, that the upcoming 2016 presidential campaign seems to be holding.

“American democracy is really becoming stifled, or at-risk, in the ability to come to a consensus on some of the hot-button topics,” Reynard said. “In the U.S., I’m going to say the ability to engage in civility and civil discourse is something that can and should be undertaken at the college level. It’s something that can be taught and learned and that should be taught and learned.”

Participants briefly discussed the “Trump 2016” chalk that appeared and was highly discussed on campus a few weeks back.

“I wasn’t paying as close of attention as I probably should have, with not recognizing that ‘Trump 2016’ became an issue and not a slogan. To some, it was a code word for something else that I didn’t notice until too late,” said President Farley.

“Our discussion tonight was about those things you think you can and can’t say and what may offend someone, and maybe you don’t intend to offend someone. But you may be concerned that you can’t express yourself because it might offend someone else,” President Farley said. “If all of us felt the exact same way, we wouldn’t be talking about that tipper topic. Civility comes down to the way you approach people. There’s nothing wrong with disagreeing with someone else, or being passionate about what you think and believe, but you have to do it in a way that you, hopefully, learn as much as you’re teaching.”