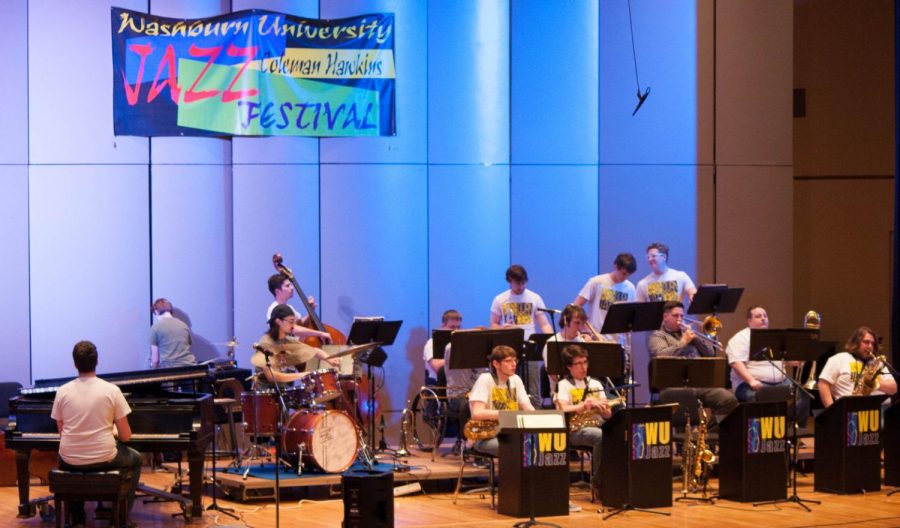 In addition to the Washburn Jazz Ensemble, the festival boasted performances from Washburn Jazz Combo I and II as well as high school and middle school bands from Topeka West, Seaman, Hayden, Eisenhower, Junction City, Turner, Iola and Basehor-Linwood.

“I was a band student and I still didn’t expect them to be that good,” said Raylee Waddell, sophomore nursing major.

The Washburn Jazz Ensemble went on at 7:30 p.m. and was the last band to play for the daylong festival. It performed a variety of songs, ranging from “Bemsha Swing” by Thelonious Monk, a famous jazz pianist, to a jazz rendition of Soundgarden’s “Black Hole Sun.”

“I select music based on what I think would be fun for the audience and also enjoyable for the students, but I still keep the learning aspects in as well,” said Craig Treinen, director of jazz studies and assistant professor of music. “There are so many different styles of jazz literature out there now. We try to do a variety of things so they have an opportunity to experience it all and not just do swing charts.”

The ensemble is made up of students from many different majors. Treinen, who has directed the Washburn Jazz Ensemble for 11 years, believes it helps people learn to appreciate jazz as a distinctly American art form that has had a tremendous influence on American culture.

The jazz festival also served an educational purpose in addition to an artistic one. It created a learning environment for both high school and middle school band directors.

“It’s an opportunity for them to perform with their ensembles and be adjudicated by nationally recognized jazz artists and educators,” Treinen said. “It’s a good way for them to continue to learn how to develop and teach jazz to the kids.”

The festival hosted four adjudicators. Nick Schroeder is an educator and freelance trumpet player. He is currently finishing his doctorate of musical arts and has performed with The Temptations, Glenn Miller Orchestra and Spoon.

Todd Wilkinson is a DMA in saxophone performance and former director of jazz studies at Washburn University. He has produced over 200 shows and has performed as a sideman for notable artists, such as Natalie Cole and Herb Ellis.

Ryan Heinlein is the head of music education at Ottawa University in Ottawa, Kansas. He recently completed his DMA and began playing trombone professionally at age 15.

David Aaberg holds a DMA in composition and serves as the director of jazz-commercial music at the University of Central Missouri in Warrensburg, Missouri. He is an accomplished trumpet player and pianist in the Kansas City area.

“It can inspire a lot of people musically,” Treinen said. “There’s always something in there for somebody. I think it’s very important for the youth of our country and anybody who plays music to have an understanding of [jazz].”