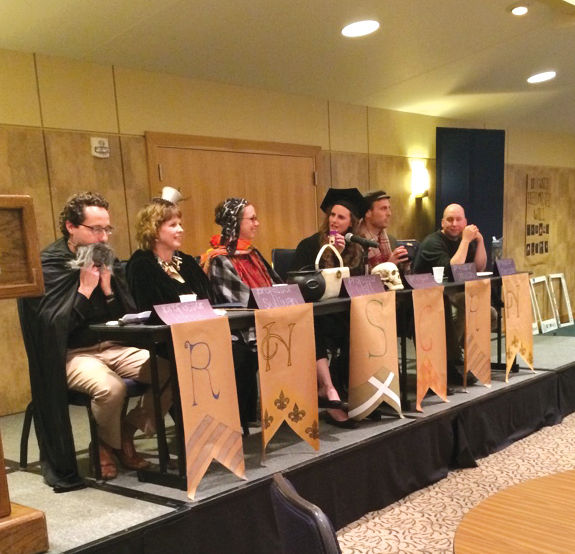 Washburn faculty members lifted their wands to cast some spells during the annual First Year Experience Faculty Debate. Each member fought for their represented discipline in front of a diverse crowd of students at 6:30 p.m. April 5 in the Washburn A/B room in Memorial Union.

Each professor selected his or her own house from the sorting hat to represent during the debate. Bryne and Gleason selected Ravenclaw, while Mercader and Sullivan went with Hufflepuff. Watt and Routsong stood out in their house selections: Watt chose Slytherin and Routsong posed as Gryffindor.

The debate consisted of three rounds of student voting in order to decide the overall winner and who would be ruling the Wizard World and lead the WU School of Magic. James Barraclough, director of undergraduate initiatives and student success lecturer, said this event has grown each year in popularity.

“It’s such a fun way to introduce students to a fun academic debate while putting a fun twist on the way faculty incorporated information about their disciplines,” Barraclough said.

Each year, the peer educators, who are the primary planners for the event, select a new theme. In addition to a theme selection, the peer educator team chooses the faculty members and writes the questions for the second round battles.

In 2014, the theme was Zombie Apocalypse and the following year it was Game of Thrones. Margeaux Seymour, 2014 graduate, attended the first FYE Faculty Debate and said it was incredibly successful due to the “Walking Dead” spin-off.

“If the faculty members show that they’re passionate about the pop culture-based topic, then their speeches will resonate more with the crowd and give them the advantage,” Seymour said.

During the first round, each professor stepped up to the podium and spoke out about the similarity between their represented discipline and the world of magic. The faculty properly incorporated pop culture references during their speeches including characters, Hogwarts courses and names of spells.

Each faculty member tried to balance their speeches between highlighting the benefits their discipline offers and their passion for Harry Potter. Their hope was that their speeches would win over students’ interests and as a result increase interest in their departments.

After the first round concluded, the six faculty members were placed into three pairings for the second round. These three pairings duked it out with five questions relating to the theme. While most answers were humorous, this was a good way for faculty to win over student votes.

Two finalists, Sharon Sullivan and Tracy Routsong, were announced after the second round’s voting results. The other four participants were exiled to the Azkaban table. For the third and final round, each finalist had the opportunity to select one of the exiled members to help them craft a speech about the weakest point of their discipline in relation to the Wizard World and how they would overcome it.

Sullivan selected Watt, while Routsong selected Gleason. Sullivan and Watt focused on the tie between the art and theater disciplines and Gleason and Routsong discussed the similarities with communication and leadership. In the end Gleason’s assistance was worthwhile because Routsong was crowned winner.

“I feel very honored to have the opportunity to participate in such a fun event in which I get to talk to students about majors,” Routsong said. “It’s a chance for students to get to see faculty in a different light and see how approachable they are.”