The Washburn Review • May 21, 2016 • https://washburnreview.org/6793/features/uncharted-4-a-thiefs-end-defines-action-adventure-gaming-2/ 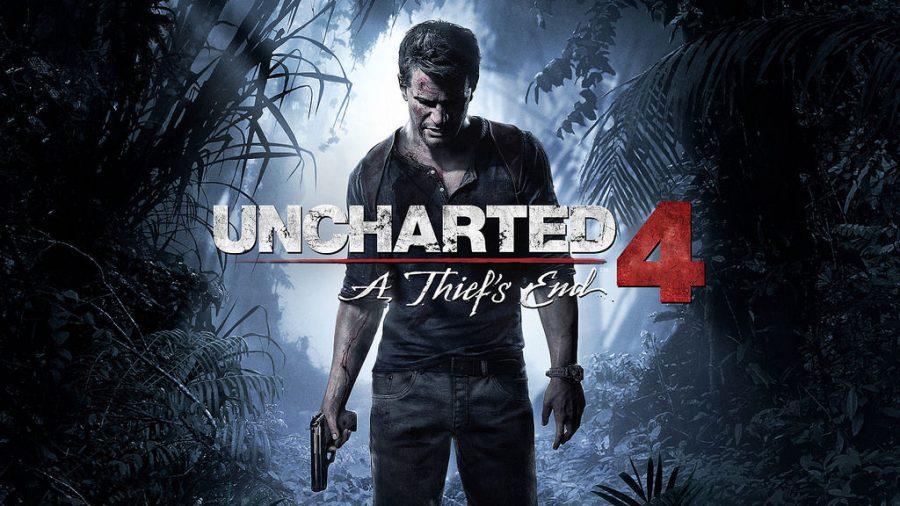 The “Uncharted” games have gone down in history as some of the best games for the PS4.

Naughty Dog, the game developer, has once again churned out another pristine game with amazing characters, story and gameplay. “Uncharted 4” sets the bar for visual beauty and begs rival companies to compete with it. It reunites favorite characters and delivers new ones that impress with their deeply nuanced performances. On top of all that, its action setpieces are out of this world, setting the bar for some of the greatest action scenes I have seen in a game in a long time.

Nathan Drake (Nolan North), an adventurous treasure hunter with a love for danger, has settled into a relaxed life. He is married to his wife Elena (Emily Rose) and is a manager at a salvage company that allows him to take dives, which remind him of his old adventuring days. In his youth he and his brother Sam (Troy Baker) hunted for the lost treasure of Henry Avery, who pulled off the largest ship heist ever. The treasure they seek could be worth over $400 million. During their search Sam apparently dies in a firefight when they are escaping a Panama prison. Nate is shocked when one early morning Sam, obviously still alive, arrives at the office of the salvage company and asks him for a favor. Sam has been in the prison for 15 years and shared a cell with Hector Alcazar, a drug lord, who helps Sam escape but then threatens he will kill Sam unless he recovers Avery’s treasure in three months and gives him half of it.

Nate chooses to help his brother, even though it means diving into the life that his wife despises. He requests the help of his mentor and good friend Victor Sullivan. During their hunt for the treasure they discover that their old business partner and the man funding their expeditions, Rafe Adler, has hired a private militia run by Nadine Ross to stop anybody who gets in his way. As Nate, Sam and Sullivan travel the world the adventure only becomes more perilous, and Nate may have risked too much on this adventure.

The story for this game is phenomenal, going to dark territory that we really haven’t seen before in these games. The characters go to places so depressing and soul-searching that the game reaches a dour tone almost equal to “The Last of Us,” another successful game in Naughty Dog’s library. Its commentary on the fragility of relationships, its exploration of Nate’s motivations and decisions and how they hurt those around them and the role of family and how it affects us are all explored in a very dark overtone.

However, around the end of the game the story resolves itself in giant leaps and bounds. The tones of the game set up for a very dark turn of events near the end of the story. It is very ominous and frightening the way these characters are spiraling out of control. Then everything just goes back to normal. It doesn’t really work for the tone that the game works very hard to set up.

Even still, the journey is a fantastic journey into the emotions of these characters that we have never seen in these games before. The performances are top-notch, with old favorites like North, Rose and McGonagle giving the best performances of these characters to date. The only notable newcomer is Troy Baker whose performance of Sam feels like I have known the character for years. Beyond him, the new characters aren’t that interesting. The villains of Nadine and Rafe are nowhere near as interesting as past villains in the series. Moving past the story the game has even more to offer.

The climbing is more of the same, which means it’s not the most fun part of the game, but it isn’t a chore to find your way around the levels. The addition of the grappling hook and the several sliding pits change the variety of the climbing by a pretty significant amount, but the shooting, stealth and driving parts of the game are much more exciting than climbing around the levels. The shooting has never been smoother and the open levels offer more variety of where to go, instead of just proceeding down hallways and shooting whoever approaches, which is the gameplay style that the past games have done.

Each enemy encounter feels different as you have to run around and analyze what the best strategy is for taking them out without being spotted. Taking enemies out quickly and secretly is central to the game because the parts involving firefights are much harder than past games. The enemies move much quicker and the AI has enabled them to sneak around the place in which you are taking cover.

Running around the combat area and swinging from one place to the next is fast and fluid, and incredibly fun. Beyond that, the added driving flows very smoothly and is part of some of the best action in the game. Driving down the streets of King’s Bay being pursued by armored vehicles, wrecking into motorcycles and hanging from the side of vehicles from your grappling hook while you are dragged through the mud is just one of the breathtaking action scenes you will experience during this game.

Speaking of breathtaking, the visuals in the game are outstanding. The humans look almost real and the environments look stunning. It is probably the best-looking game I have ever seen.

I have not experimented with the multiplayer because in past games it has been generic, but it will probably entertain those who have enjoyed the multiplayer in past “Uncharted” games. Also, the game is filled with collectibles to hunt down, and the several different difficulty modes give the game a lot of replayability.

With stunning environments, fun shooting mechanics, enhanced platforming, riveting action scenes, interesting characters and a fantastic story all add up to an amazing game that is worth its price. Whether “Uncharted 4” is the best game in the series, only time will tell, but it is certainly one of the best games I have ever played.