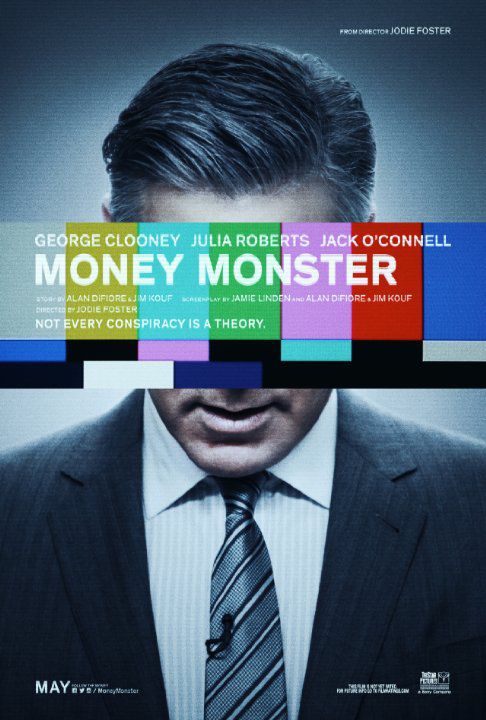 Morally Bankrupt: "Money Monster" is the fourth film actress Jodie Foster has directed. She has also directed episodes for two Netflix series: "Orange is the New Black" and "House of Cards."

This film had a lot of potential. I had seen the trailers, and that was my first mistake. The trailers for this film gave away too much of the plot, so when certain scenes began to unfold, I wasn’t as surprised or on edge as I should have been. However, this film was definitely thrilling. We feel the pressure mounting as soon as the story begins. When Gates isn’t arguing with Patty over the day’s run sheet, he’s doing an obnoxious hip hop routine as he explain’s the current state of the stock market. All of these scenes, though, are interspersed with flashes of our gunman – Kyle, as we later know him – sneaking on set.

Everyone in my theater was dead silent, save for a few giggles at Gates’ antics, because we all knew that Kyle was angry and dangerous the moment he appeared on scene. The juxtaposed garish dance number on camera and shadowy, solemn walk backstage flowed nicely together and put my stomach in knots. Foster conveyed that sense of doom nicely.

That, unfortunately, is where Foster’s directorial vision tapered off, though. The rest of the film played out choppily and was far too on-the-nose about its message.

The best aspect of this film was the terror and tension of Kyle forcing Gates at gunpoint to strap a bomb to his chest, and the next half hour of dialogue on that stage. O’Donnell and Clooney played off of each other solidly, and I found sympathy and disgust for both of them.

There wasn’t a clear victim between them when they laid their cards on the table. The discussion these two had is why this particular stock’s crash was so detrimental, and how it could have happened so unexpectedly was my favorite part of the film.

Because really, you have to agree with Kyle: the situation doesn’t make sense. They had a public interest in and investment was booming. All of the Wall Street analysts predicted healthy growth for the foreseeable future, and then wham! The company’s stock plummeted and lost $800 million in an instant. How does a company on the rise lose that kind of money over night and not have an answer as to why? With the pressure of a live bomb, the CEO responsible suddenly unreachable and the world watching live on TV, that is the $800 million question.

What’s so unfortunate, then, is that the other 60 percent of the film was paced too slowly and deflated any tension it had built up earlier. I did not care about the businessmen and women outside of that studio, nor did I think it necessary for our main three characters to ever leave the room they were stuck in. If they had stayed where they were and only had contact through phones and video calls, the plot would not have meandered nearly as much and the room would have been deliciously claustrophobic.

I would have liked to have seen more of Patty’s character taking control and talking Gates through this. She was easily the smartest in the room – the only one with an intact moral compass and was vastly underutilized in lieu of more boring scenes outside of the studio.

Kyle’s character was nearly my favorite. He was a stand in for the common man, and he posed excellent questions that were getting ignored up until that point.

However, come the second half, Kyle’s character becomes more of a thematic prop than powerful presence that moves the plot along, and that is such a shame. He was literally prodded and paraded around by Gates for the final 20 minutes as they tried to wrap up the plot, and Kyle was no longer imposing nor interesting. He became a mouthpiece for the heavy-handed, preachy message of this film.

“Money Monster” could have been something great. We were given a small, talented cast and a mystery-thriller premise that piqued my interest. What we ended up with was an uneven narrative too caught up in its own message to entertain its audience or keep up the characters’ momentum and an unclear directorial vision.