The Washburn Review • May 13, 2016 • https://washburnreview.org/6711/news/students-attend-united-nations-commission-on-the-status-of-women/

Students attend United Nations Commission on the Status of Women 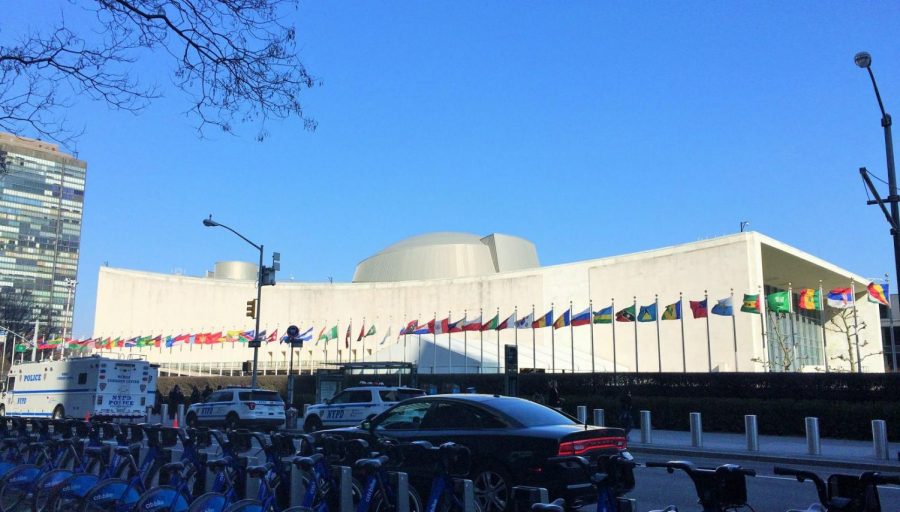 Outside the United Nations general assembly building, where representatives gathered to discuss updates to the language used in the Sustainable Development Goals concerning gender equality. As guests of the International Public Policy Institute, we were even able to observe some of these general assembly meetings.

After Spring Break I had the opportunity to attend the United Nations 60th Commission on the Status of Women through Washburn Transformational Experience. I went with a group of three other students led by Sharon Sullivan, chair of the women and gender studies department. We were only in New York for a week, but the impression this trip left on me was life-changing.

When it was finally time for the trip, I was excited beyond belief. We landed at 11 p.m. and the first thing we wanted to do after we checked in was eat a New York slice. Pizza never tasted so good. An early rise awaited us the next morning. Coffee in hand, I attended my first panel without really knowing exactly what to expect. Would there be time for questions? Where would I sit? Was it unprofessional of me to take notes? All of my insecurities faded as the event started.

This panel was intimate, no bigger than a class at Washburn. Four representatives sat at the front of the room as a host from ARROW introduced them. The topic was religious fundamentalism’s effects on sexual and reproductive health and rights in the global south. Fadoua Bakhadda from the Moroccan Family Planning Association described fundamentalism’s infiltration of government leadership and policy, and said that this results in continued silence of women and the limiting of their rights to health.

That was when I realized I was among ‘my’ people – activists, advocates, like-minded individuals. I left the panel feeling settled in, like I had come home.

In a panel on the refugee crisis in Turkey, representatives described the need for holistic and comprehensive policies to address and protect refugees’ rights to life and dignity. Gendered perspective is essential because of how this crisis disproportionately effects displaced women. After this event, I found the courage to introduce myself to Francoise Girard, president of the International Women’s Health Coalition. Together we joked about the imbecile response from U.S. governors towards refugees.

In a panel about violence against women in Egypt, I met a representative from the Women and Memory Forum who described how they put women back into the history of Egypt – advocacy through documentation by promoting neglected figures and the marginalized roles of women in history. Like me, she believes that this is a way of combating a culture of violence against women at its roots in misinformed ideology.

I attended about 12 events in total that week, in addition to listening to the general assembly’s proceedings from the overflow room.

Our group was invited by the International Public Policy Institute, an NGO dedicated to mentoring young world leaders, and on Tuesday we met our sweet host, Anele, for dinner. We talked about the state of young leadership the passions we care about as young observers.

Who could spend a week in New York City without a little sightseeing? When we weren’t attending meetings and panels, Tina Ruecker, Christina Seeley, Reyna Perez and I toured the streets of New York. We took in a Broadway show, rode to the top of the Empire State Building, ate dinner in Times Square and took the subway to the World Trade Center memorial.

Ultimately this trip was about so much more than visiting New York, and that was the hardest part about coming home. There was an overwhelming sense of unity and solidarity at the United Nations like I had never felt before. Leaders of the global movement were gathered in one place to talk about progress and brainstorm the next steps forward – it just radiated confidence and optimism like warm sunshine. It was never a pep ralley, it was an opportunity to plug into the global community. While I respected the women I met as leaders, they believed in me becoming one.

That was the greatest takeaway of this trip for me – recognizing my own abilities as a leader. I have been a feminist for several years, but never participated as an activist until college. Now I know where my passions lie and I’m confident in my potential. Though the climate of Kansas can feel stifling and isolated, I now know that I am part of a movement and community that spans the globe – and that is the most heartening thing.